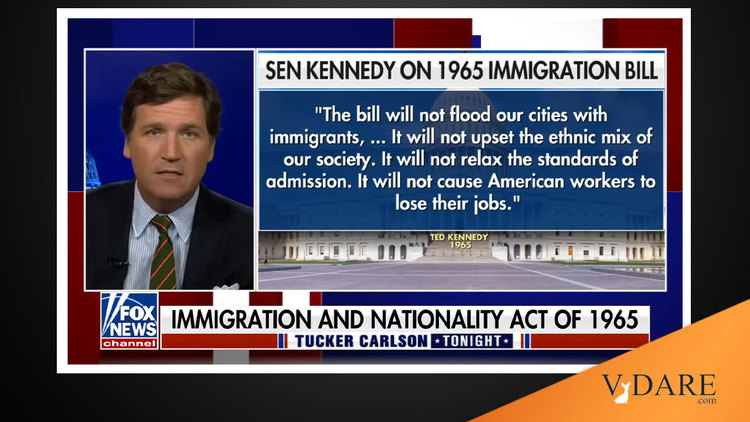 Tucker Carlson’s Great Monologue On The Immigration Act Of 1965: Does VDARE.com Deserve Credit?

But now it‘s being revealed to television viewers thanks to Tucker Carlson‘s recent monologue:

The Immigration and Nationality Act of 1965 turned out to be one of the most significant pieces of legislation ever passed in the U.S. Congress. It changed America completely and forever. pic.twitter.com/uip6t68ANB

That‘s an eight-minute excerpt, the whole thing is here:

This has led to hate from Chuck Schumer:

If you don't want people talking about white Middle Americans being replaced, you should stop making replacing them a key and explicit electoral strategy of the Democratic Party. https://t.co/dUuaf8neb4

And from witch hunter Jared Holt:

Tucker’s show is arguably the most mainstream media product coming out of the conservative media Potemkin village and it barely distinguishable from white nationalist blogs. If that’s not an alarm bell, I don’t know what is. https://t.co/KJEWJp1JcZ

The question arises: Should Tucker have credited us, or people more or less like us? Ann Coulter did, and was attacked for it.

In fact, anyone who quotes us, links to us, or socializes with us gets attacked, so probably not, but it would be odd if our 20+ year archive of articles, including Brimelow pieces going back to the 90s, wasn‘t used in their research.

We‘re not actually evil plotters, as the SPLC seems to think, but a journalistic and educational organization, promoting knowledge about immigration and similar things. (You can donate to us, tax-deductibly, here.)

Over at Occidental Dissent, Hunter Wallace finds this cheering:

I’m pleased with this.

If you had told me in 2019 that Donald Trump was going to lose the 2020 election, but the Great Replacement would go mainstream, support for secession and political violence would explode among Trump voters, the House GOP would refuse to codify gay marriage and interracial marriage into federal law, Roe v. Wade would fall, Christian nationalism would gain momentum and that Charlie Kirk would be more radicalized in three years than Richard Spencer, I would have been pleasantly surprised.

2014 to 2016 felt like taking two steps forward. 2017 to 2020 felt like taking a step back. 2021 and 2022 feel like taking two steps forward again. Three years ago wasn’t that long ago, but it feels like there has been a big shift in a good way since around the time of that Joker movie. Of course, I could quibble that ordinary people still aren’t as radical as I would like and this has to be soft peddled to them, but I am more struck by how radical they have become in so short a time span. Steve King was denounced and hung out to dry in 2019 for saying much less.

The House voted 424 to 1 over a gaffe to condemn Steve King, white supremacy and White Nationalism in 2019. In 2022, Tucker Carlson is on television with a now conventional monologue about the Great Replacement and 157 House Republicans refused this afternoon to codify gay marriage and interracial marriage into federal law.

I‘m pleased, too. I would have been a little more pleased if he‘d quoted us, but the facts are the facts, wherever they come from.