Tucker Carlson recently explained what a major expense unlawful immigration is on the American people using the new FAIR report, The Fiscal Burden of Illegal Immigration on United States Taxpayers.

Below, the FAIR study showed that illegal aliens do pay some taxes, but not nearly enough to cover the benefits they receive, causing American taxpayers to spend $135 billion annually for the invaders’ upkeep. 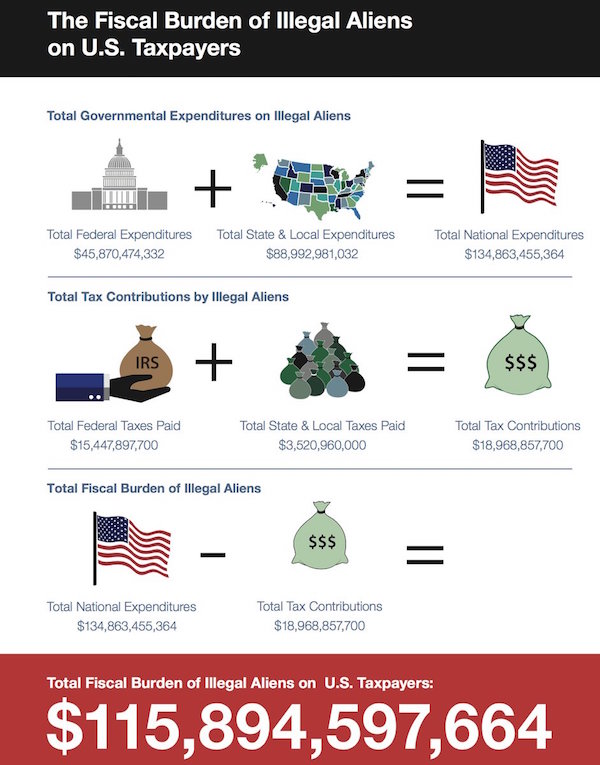 In a striking illustration of how illegals are robbing us blind, Tucker observed, “Americans spend only about $70 billion every year paying tuition at public colleges and universities. So if you eliminate the expense of illegal immigrants, we could make every public college in the country tuition free and still have nearly $50 billion left over.”

Illegal aliens flock to stupid-generous America where even foreign thieves like them receive on average more than $8,000 each of free-to-them stuff. 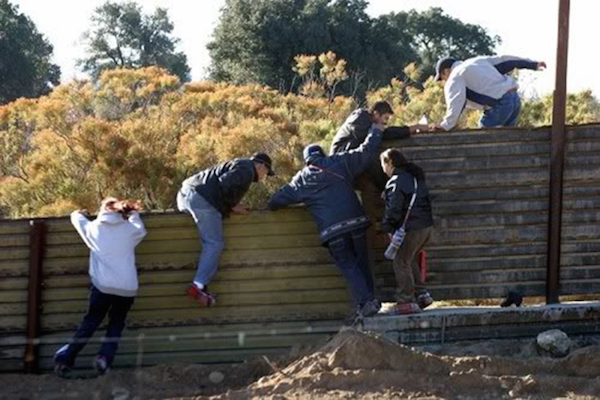 Keep in mind that the $116 billion pricetag is an annual cost, something that adds up rather significantly over decades.

TUCKER CARLSON: One of the most striking features of the debate over immigration in America is the fact that it’s not much of a debate — you’ll notice the failure, indeed the refusal of our elites to grapple with what exactly it means to allow millions of low-skilled workers from around the world to move here. When it comes to details about that, they quote the Statue of Liberty and they move on quickly. Maybe they don’t really want to know much about the effects of their policies; maybe they really believe that every immigrant is a high school valedictorian or some world-class STEM talent who’s only prevented from founding the next Apple or curing cancer by the bigotry of native-born Americans — maybe they really think that. By the way, facts rarely enter into the conversation; it’s wholly emotional, but facts still matter and tonight we have some.

A new study by the Federation for American immigration Reform finds that this country’s approximately 11 million illegal immigrants cost taxpayers about $135 billion per year in medical, education and law enforcement expenses. Now there’s an offset to this —taxes, and yet according to the study, these illegal immigrants pay only about $19 billion a year in taxes. That leaves a deficit, which you pay, of $116 billion. Now even by Washington standards. that’s a huge number.

To put it into some perspective, Americans spend only about $70 billion every year paying tuition at public colleges and universities. So if you eliminate the expense of illegal immigrants, we could make every public college in the country tuition free and still have nearly $50 billion left over to — I don’t know — fix decaying infrastructure or subsidize health insurance for the middle class or probably a lot more.

So it’s worth considering as we debate border control and amnesty these numbers. But we also have another set of numbers, these from the Center for Immigration Studies on chain migration. Now when advocates in New York or Washington tell you about immigration, they always pretend as if there’s an economic rationale for it. it’s important — like every immigrant is a high-qualified expert in a coveted field that needs to be here for the sake of our economy.

In fact according to the numbers, government numbers, your typical immigrant to the US is simply related to somebody who’s already here, usually a previous immigrant. According to DHS data, in recent years every so-called “initiating immigrant” — the first one — has brought an average of 3.5 family members into the country with him. For some countries, the rate is even higher. Each legal immigrant from Mexico has brought an average of more than six additional family members here as well.

Many of these family members have little prospect for contributing economically. For instance, 24 percent of immigrants are older than 50, so if they become US citizens, they can become eligible for Social Security and Medicare despite paying very little into those programs. None of this is an attack on anyone as an individual; we’re willing to believe that most of these people these immigrants are good people because they likely are good people, but it’s still an extremely expensive proposition for America far more than most people understand. [Editor: “Good people” don’t invade countries to steal jobs and benefits from the citizens and taxpayers.]

Now all of this ought to weigh heavily on Congress is it debates passing an amnesty for DACA beneficiaries. Supposedly the list will only benefit a small group, a limited group of illegal immigrants who came here as kids but if 700,000 DACA recipients become legal citizens of course they, under the rules of chain migration, will bring many more — estimates suggest millions more, including parents and siblings who may also have entered this country illegally.