Tsarnaev-Todashev Story Has Immigration Fraud Written All Over It

In 2008, the US government granted Todashev asylum, a protection granted to foreigners with a credible fear for their safety in their homelands ­because of religious, political, or other specific forms of persecution.

But Reuters reports that Todashev's father is a government official in Grozny whose father is in tight with the All-Time Champ Chechen Ramzan Kadryov.

Todashev then obtained a green card in February 2013, making him a legal permanent resident and clearing the way for him to apply for US citizenship in a few years if he ­remained in good standing, said law enforcement officials with direct knowledge of the ­information.

Immigration and Customs Enforcement arrested ­Todashev’s girlfriend, Tatiana Gruzdeva, May 16 on immigration violations, said a law enforce­ment official. An ICE spokesman confirmed that she is in custody.

Here's the late Ibragim Todashev and his 24-year-old widow from the Wall Street Journal: 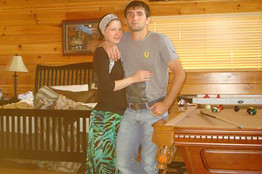 Ms. Manukyan, an Armenian who converted to Islam before marrying Mr. Todashev, says she met her late husband in 2010 through a mutual friend in Boston. She says she separated from Mr. Todashev in November but was still in regular contact with him and was partly supporting him through their joint bank account.

We hear a lot these days about immigrants' "American Dream," but the Chechen Dream appears to be to have some babe support you. Do you think these guys were big hip-hop fans back in the old country?

If you were a nice-looking young Armenian girl in the United States, would you convert to Islam to marry some lay-about Chechen cage fighter? I guess we know in the case of Mrs. Tamerlan Tsarnaev, whose doctor father is a Yale and Phillips Exeter man (same as his father), who converted to Islam to marry Bomb Brother #1.

At the time of yesterday’s shooting, Todashev was free on a $3,500 bond, according to Florida court ?records, after being arrested May 4 by sheriff’s deputies at gunpoint at the Premium Outlet Mall in Orlando on a charge of felony aggravated battery after a mall ?security guard reported a fight in a parking lot that left a man battered and bleeding.

In 2010, a Boston police report stated Todashev was involved in a violent road rage incident in Downtown Crossing

The BPD report states officers “witnessed several people struggling to restrain a white male, later determined to be the subject, Ibragim Todashev. Officers heard Todashev yell, ‘You say something about my mother, I will kill you!’ Officers struggled to physically ?restrain and handcuff Todashev. ...” His case was continued without a finding.

According to the father, Ibragim Todashev was studying English at Grozny University when he got a chance to go to the United States in an exchange program in 2008.

"He loved it there from Day One," the father said. "He would call me and tell me how everybody was into sports, what great sports gyms they had and what wonderful possibilities he had for the mixed fighting and boxing he loved so much.

"Then when he told me that he loved it in America and wanted to stay," the father said, "I didn't mind."

I mind. Why is it okay for various violent Chechens to just up and move to my country because they think it's a better place to practice hurting people?

He said his son hit it off with Tsarnaev because of their common Chechen heritage. Although Tsarnaev never lived in the restive Russian republic, his family's roots were there and there are indications that Tsarnaev felt a kinship with the Muslim separatists who want the region to break free from Russia.

"We are a small people who endured so many hardships to survive in our difficult history that it is only natural for us to stick together, especially abroad," said Todashev, 53, who is head of the municipal services department in Grozny.

So that job puts the elder Todashev, who is polygamously married to two women and has twelve children, what, about two steps down the org chart from Ramzan the Great and thus three steps down from Vladimir Putin? How exactly does that qualify you for refugee status?

Americans have this image of the refugee program existing for the likes of Einstein, Toscanini, and Solzhenitsyn. But, in reality, these days it tends to be a vehicle for immigration fraud by well-connected individuals who can plausibly purport that their relatives back home have made a lot of their neighbors extremely mad at them.

Like, for example, the late Brendan Mess's girlfriend Hibatalla Eltilib of the Sudan, who seems to have encouraged Tamerlan Tsarnaev's Muslim extremism.