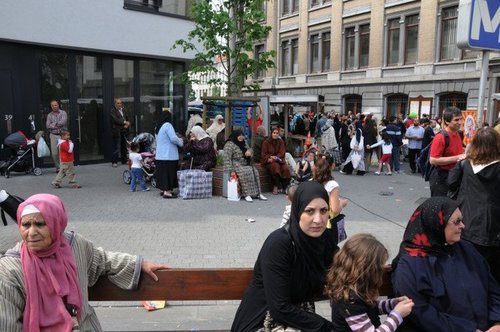 Trying to Gentrify a Jihadi Neighborhood: The Molenbeek Case Study

War photographer Teun Voeten writes in Politico about trying to gentrify the Brussels neighborhood where so many terrorist plots are hatched:

I called Molenbeek my home for nine years. In 2005, it was the city’s last affordable neighborhood — in large part because of its bad reputation. My apartment, just across the canal from the city center, is close to the home where two suspects in the Paris attacks were based, and around the corner from where the shooter from the foiled Thalys attack in August had been staying.

I was part of a new wave of young urban professionals, mostly white and college-educated — what the Belgians called bobo, (“bourgeois bohémiens”) — who settled in the area out of pragmatism. We had good intentions. Our contractor’s name was Hassan. He was Moroccan, and we thought that was very cool. We imagined that our kids would one day play happily with his on the street. We hoped for less garbage on the streets, less petty crime. We were confident our block would slowly improve, and that our lofts would increase in value. (We even dared to hope for a hip art gallery or a trendy bar.) We felt like pioneers of the Far West, like we were living in the trenches of the fight for a multicultural society.

Slowly, we woke up to reality. Hassan turned out to be a crook and disappeared with €95,000, the entire budget the tenants had pooled together for our building’s renovation. The neighborhood was hardly multicultural. Rather, with roughly 80 percent of the population of Moroccan origin, it was tragically conformist and homogenous. There may be a vibrant alternative culture in Casablanca and Marrakech, but certainly not in Molenbeek.

Over nine years, I witnessed as the neighborhood become increasingly intolerant. Alcohol became unavailable in most shops and supermarkets; I heard stories of fanatics at the Comte des Flandres metro station who pressured women to wear the veil; Islamic bookshops proliferated, and it became impossible to buy a decent newspaper. With an unemployment rate of 30 percent, the streets were eerily empty until late in the morning. Nowhere was there a bar or café where white, black and brown people would mingle. Instead, I witnessed petty crime, aggression, and frustrated youths who spat at our girlfriends and called them “filthy whores.” If you made a remark, you were inevitably scolded and called a racist. There used to be Jewish shops on Chaussée de Gand, but these were terrorized by gangs of young kids and most closed their doors around 2008. Openly gay people were routinely intimidated, and also packed up their bags.

I finally left Molenbeek in 2014. It was not out of fear. The tipping point, I remember, was an encounter with a Salafist, who tried to convert me on my street. It boiled down to this: I could no longer stand to live in this despondent, destitute, fatalistic neighborhood.

Territorialism isn’t a fashionable concept in today’s discourse, but it sure is useful in explaining a lot of behavior.

By the way, Brussels today: