On Friday, President Trump added six nations to the US travel ban, and Nigerians are kicking up quite a squawk, at least according to the New York Times. Nigeria is Africa’s most populous country, with around 204 million people now but its proclivity toward extreme growth is notable even among Third World spots. 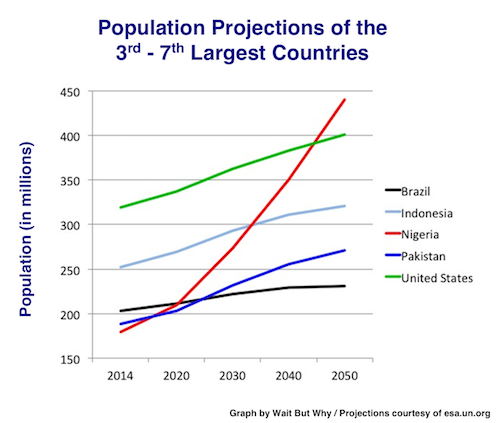 Also concerning is the increasing number of African illegal aliens headed to the US—what’s wrong with Europe which is closer and easier to reach? One of the reasons President Trump included Nigeria has been the number of visitors who never leave.

In addition, the reactions range from extreme entitlement to something that sounds vaguely threatening. Following are remarks from a Nigerian government official:

. . .Lai Mohammed, Nigeria’s Minister of Information and Culture, said Nigerian officials had not been advised their country would be included in the ban.

“It would be quite unfortunate if for any reason Nigeria were on the list,” Mr. Mohammed said, noting the two government’s cooperation in combating terrorism. “It would be a double jeopardy: The country has committed a lot of resources to fight terrorism. Any travel ban cannot but be inimical to the growth of the country.”

He added, “Once a travel ban is imposed on a country, the consequences are not always pleasant.” . . .

There was another article from the same day saying the “contentious” ban would cause “detachment from family members” — so do Nigerians expect to transplant the entire clan?

The Trump administration’s expansion of the nation’s contentious travel ban on Friday to include Nigeria, Africa’s most populous nation, and several other countries deeply rattled immigrants, leaving some Nigerians in New York worried that it would break family ties and have a negative effect on both countries.

“Africans have very strong family ties,” said Henry Ukazu, 35, of the Bronx, warning that not allowing people from Nigeria to come to the United States to live would result in negative consequences for both the United States and Nigeria.

Mr. Ukazu, who immigrated to the United States 10 years ago, predicted that the travel ban would bring about “a level of detachment from family members, and that is not a welcome development.”. . .

Monday’s Times front-paged a headline on the same topic: U.S. Ban Sunders Families and Slams Door on Much of Africa. Do we detect a pattern here?

Again, it’s the same complaint that America does not have open borders for the millions on earth—Nigerians in this case—who would like to live here.

The newlyweds had already been apart for half their yearlong marriage. Miriam Nwegbe was in Nigeria. Her husband was in Baltimore, and until she could join him, everything was on hold: finding a home together, trying for their first baby, becoming an American family.

Then, on Friday, their lives were thrown into disarray by the expansion of President Trump’s ban on immigration to include six new countries, including four in Africa. Nigeria, the continent’s most populous nation, was one of them.

“America has killed me,” Ms. Nwegbe’s husband, Ikenna, an optometrist, texted her when he heard. “We are finished.” . . .

Really? America is killing people just by trying to institute some long overdue immigration enforcement? Why doesn’t the Times address the real problems with extreme legal and illegal immigration instead of endless sob stories?

At this point, the world would be better off for everyone concerned to stay home and fix their own country.