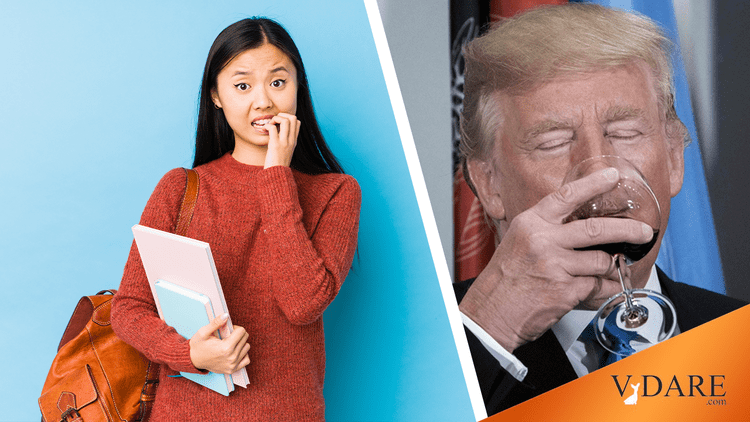 Trump To Expel 3000 Chinese Graduate Students For Espionage—Why Not ALL Chinese Students?

The Trump Administration is considering and looking at taking action against Red China for their mass espionage and subversion in American universities by restricting student visas, F-1 and M-1 Non Immigrant Visas (NIV). Not mentioned is the mass fraud and illegal employment in which Chinese students participate. The administration is looking at expelling 3,000 graduate students likely involved in espionage of various kinds. I call this a start.

The Trump administration plans to cancel the visas of thousands of Chinese graduate students and researchers in the United States who have direct ties to universities affiliated with the People’s Liberation Army, according to American officials with knowledge of the discussions.

The plan would be the first designed to bar the access of a category of Chinese students, who, over all, form the single largest foreign student population in the United States.

It portends possible further educational restrictions, and the Chinese government could retaliate by imposing its own visa or educational bans on Americans. The two nations have already engaged in rounds of retribution over policies involving trade, technology and media access, and relations are at their worst point in decades.

Sadly, it appears that Jared Kushner and openly anti-Trump university lobbyists are working behind the scenes to soften the blow, instead of expelling all Red Chinese students and prohibiting all future students from Red China, only a select few will get the chop.

American universities are expected to push back against the administration’s move. While international educational exchange is prized for its intellectual value, many schools also rely on full tuition payments from foreign students to help cover costs, especially the large group of students from China.

So, follow the money, American universities are dependent on Chinese students paying full tuition, though many for the last few decades have been on scholarships, including those at public universities.

But aside from the direct national security threat of Red Chinese spies, the more damaging threat is the American jobs Chinese students steal through Optional Practical Training, Curricular Practical Training, mass numbers of H-1B NIVs, employment visa fraud, and illegal employment, not to mention those who stay illegally after graduation.

More than 3,000 Red Chinese need to be expelled, all 360,000 should be expelled. Imagine the fury of the pointy headed intellectualoids in the universities who all hate President Trump! Just for political reasons alone the President should order all Red Chinese deported. This will also cause a fury in Red China, undermining the implicit agreement between the Chinese and their Red government; the government gives the population prosperity and a chance to study in America in exchange for the tyranny and corruption, but if the Reds can’t deliver prosperity and a ticket to America, things get hot. But the best part is the financial impact on leftist universities losing hundreds of millions of dollars in tuition.

Also of import besides the direct espionage are the Confucius Institutes (CI) in the United States that are directing and controlling the study of China in the United States. The CIs are Chinese government-funded and directed outlets at American colleges and universities where China provides Chinese language professors, textbooks, and study material that is supportive of Red Chinese foreign policy goals and part of the anti-White milieu on campus, blaming Europeans, Americans, and Whites in general for the problems China had in the late 19th and early 20th centuries during the later period of the Manchu rule over China. CIs spew anti-American and pro-China agitprop, as well as allying with openly anti-White groups.

As usual though the Trump Administration is doing half measures and ignoring the authority it has to summarily end the problem. First though, the Trump Administration appears to realize the power it does has, the strategy seems to be that current students of an identified security threat will have their NIVs cancelled by the State Department, an extremely powerful tool that the Administration has ignored in the past. Also not involved is ICE SVU, which will be required to act as some point.

Secretary of State Mike Pompeo discussed the visa plans with President Trump on Tuesday in a White House meeting.

Generally, the Department of State (DOS) is required to cancel a visa, and that is Secretary Pompeo’s responsibility. But once the NIV is cancelled, it is the responsibility of the alien to depart. If the alien does not depart, it is the responsibility of ICE SVU to track the Reds down and make an arrest. But will that happen? The DOS has some law enforcement personnel, the Diplomatic Security Service (DSS), but that is a tiny agency. ICE SVU will be charged with making the arrests, but like others in the bureaucracy, expect sabotage and insubordination.

Instead of half measures, the Trump Administration needs to expel all Chinese students, if not only to protect American jobs and end overstays by Chinese students. Ending all new F-1 and M-1 NIVs for Red Chinese is also a good idea.