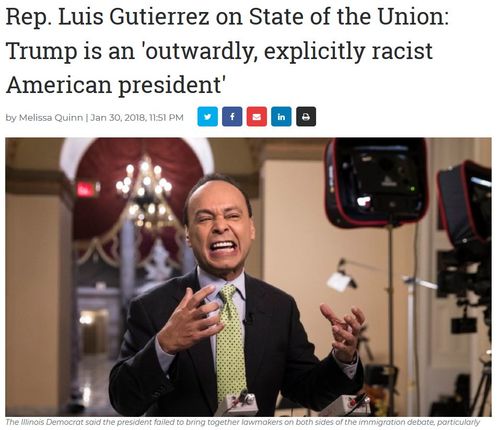 Three words that President Trump didn’t utter in his SOTU address put him beyond the pale with the Democrats in attendance: “diversity,” “inclusivity,” and “LGBTQ.” It doesn’t matter how much Trump concedes—and he is conceding too much—they know the President opposes their priorities.

In many ways, this speech was a refreshing departure from eight years of multiculturalism on steroids. Trump harkened back to the Reagan years with a fundamentally patriotic message that didn’t cater to the “diversity” coalition now driving the Cultural Marxist Left.

Trump’s speech also revealed one crucial fact: right-wingers do not have a monopoly on “hate.” “Hate” was on full display in the reaction of Democratic leaders, who might as well have donned the black masks of their Antifa allies. The expression on Luis Gutierrez’s face, before he threw a tantrum and stormed out of the chamber, was that of a raving lunatic in need of a straitjacket. “Hate” oozed through his greasy pores. After exiting, Gutierrez proclaimed: “I was hoping to get through my life without having to witness an outwardly, explicitly racist American President…. My luck ran out.” [Rep. Luis Gutierrez walks out of Trump's State of the Union as progressives write off bipartisanship permanently, by Philip Wegmann, Washington Examiner, January 30, 2018 ]

Minority leader Nancy Pelosi claimed that the President was holding “Dreamers hostage” to the most “extreme anti-immigration agenda in generations.” Pelosi described Trump’s first year in office as an “ongoing assault on our democracy.” Trump, she claimed, symbolized a “closed fist” presidency and “wasted opportunity.”

But the real rub for Pelosi and others: Trump’s rhetorical shift from “diversity” happy talk implicitly questions the value broad demographic changes caused by mass immigration. It also explains why a presidential speech that emphasizes border security, an end to “chain migration,” and for the most part sensible immigration controls, can be described as “white nationalist” by Leftist propagandists.

Trump’s reference to the “forgotten men and women” across America, who helped catapult him into the White House, is synonymous with the blue-collar whites—Hillary Clinton’s “Deplorables”—who were largely written off by politicians until Trump’s 2016 presidential bid. Trump’s SOTU speech recognizes the America that most Baby Boomers remember.

Trump’s “Make America Great Again” theme also explains the intense reaction from his opponents. To them, MAGA means reversing the country’s “transformation” under Obama. Theirs is an organized effort to stop Trump derailing what they viewed as the triumphant Progressive agenda—drowning the constituency that elected Trump: white, blue-collar Middle Americans.

The only way to ensure that another Amnesty doesn’t override patriotic immigration reform measures: mobilize the grassroots. Put GOP politicians on notice that Amnesty continuing the RINO Flake-Graham-McCain sell-out will carry a political price. 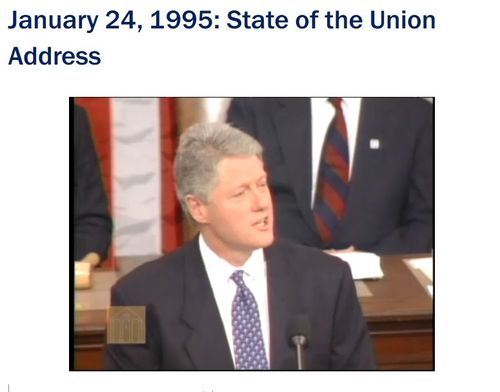 In his 1995 SOTU speech, President Bill Clinton noted: “The common bonds of community which have been the great strength of our country from its very beginning are badly frayed. What are we to do about it?”

President Trump should remind America and members across the aisle what Clinton warned about:

All Americans, not only in the states most heavily affected but in every place in this country, are rightly disturbed by the large numbers of illegal aliens entering our country. The jobs they hold might otherwise be held by citizens or legal immigrants. The public service they use impose burdens on our taxpayers. That's why our administration has moved aggressively to secure our borders more by hiring a record number of new border guards, by deporting twice as many criminal aliens as ever before, by cracking down on illegal hiring, by barring welfare benefits to illegal aliens. In the budget I will present to you, we will try to do more to speed the deportation of illegal aliens who are arrested for crimes, to better identify illegal aliens in the workplace as recommended by the commission headed by former Congresswoman Barbara Jordan.

Pelosi, Chuck Schumer, and the Democratic Leadership needs to tell us: Was Clinton wrong?