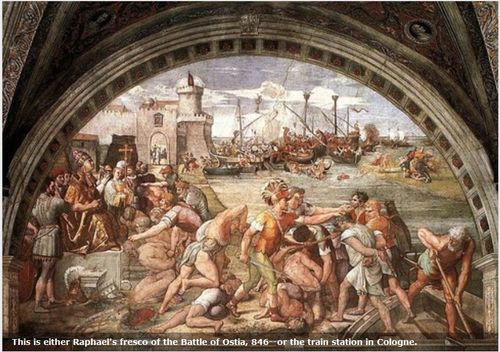 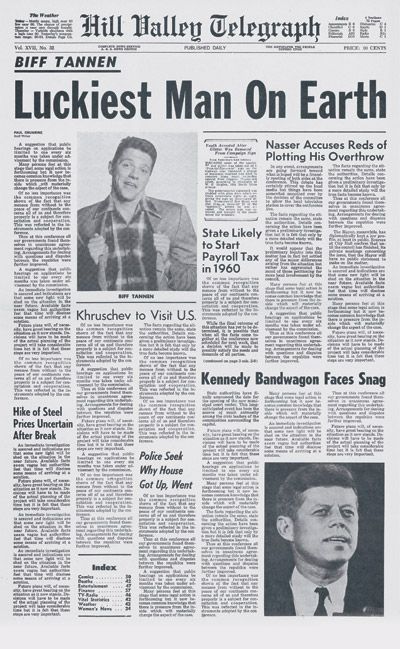 In the alternative history present of the 1989 sequel movie Back to the Future 2, villain Biff Tannen is a fabulously wealthy casino owner known as The Luckiest Man on Earth because he has built his fortune by betting with uncanny accuracy on sports. (Biff’s secret is that he used Doc Brown’s time machine to visit the future, where he obtained a paperback sports almanac). Lately, co-screenwriter Bob Gale has been claiming that Biff was based on Donald Trump.

Unlike with the character of real estate tycoon Daniel Clamp in 1990′s Gremlins 2, I don’t recall this coming up at the time. But it’s not implausible: Trump has been famous forever and his personality has been exactly the same for all these decades (Trump is the anti-Bowie, never reinventing himself). Thus, I was flipping the channels tonight and on one of those digital broadcast networks that recycles really old TV shows, there was Johnny Carson … telling a Donald Trump joke.

(On the other hand, director and co-writer Bob Zemeckis’s account is that Biff Tannen is based on studio executive Ned Tanen, who threw Zemeckis and Gale’s screenplay for I Wanna Hold Your Hand on the floor because he thought it was anti-Semitic.)

Whether or not Biff was based on Trump, for the last 8 months Trump really has been the Luckiest Man on Earth as every spat he’s gotten into turns out golden for him.

In the latest, Pope Francis dissed Trump, saying, “A person who thinks only about building walls, wherever they may be, and not building bridges, is not Christian.”

In response to the Pope:

If and when the Vatican is attacked by ISIS, which as everyone knows is ISIS’s ultimate trophy, I can promise you that the Pope would have only wished and prayed that Donald Trump would have been President because this would not have happened.

Trump’s supporters tweeted back that, of course, the Vatican is within a wall.

But, as usual with Trump lately, it turns out even better than that: The wall around the Vatican was built by Pope St. Leo IV, a rather Trumpish-sounding fellow, following … the Arab Muslim sack of the Vatican in 846. From Wikipedia:

The Arab raid against Rome was an Arab raid in 846 against Rome. Saracen raiders plundered the outskirts of the city, sacking Old St. Peter’s and St. Paul’s-Outside-the-Walls Basilicas, but were prevented from entering the city itself by the Aurelian Wall.

In the 820s, the Aghlabids of Ifriqiya (known by medieval Italians as the Saracens) began the conquest of Sicily. … A large force set sail from Campania, landed at Porto and Ostia in 846. The Arabs struck as the Roman militia hastily retreated to the safety of the Roman walls.[1]

The Arab raiders seem to have known about Rome’s extraordinary treasures. Some basilicas, such as St. Peter and Saint Paul Outside the Walls, were outside the Aurelian walls, and thus easy targets. They were “filled to overflowing with rich liturgical vessels and with jeweled reliquaries housing all of the relics recently amassed”. As a result, the raiders pillaged the surroundings of the city and the two holy shrines.

Shortly after the siege Pope Leo IV built a strong wall on the right bank of the Tiber, in order to protect the Church of St. Peter. The encircled territory, defended by Castel Sant’Angelo, was named after the pope Leonine City …

A Roman and the son of Radoald, was unanimously elected to succeed Sergius II, and as the alarming attack of the Saracens on Rome in 846 caused the people to fear for the safety of the city, he was consecrated (10 April, 847) without the consent of the emperor. … As soon as Leo, much against his will, became pope, he began to take precautions against a repetition of the Saracen [Muslim] raid of 846. He put the walls of the city into a thorough state of repair, entirely rebuilding fifteen of the great towers. He was the first to enclose the Vatican hill by a wall. To do this, he received money from the emperor, and help from all the cities and agricultural colonies (domus cultae) of the Duchy of Rome. The work took him four years to accomplish, and the newly fortified portion was called the Leonine City, after him. In 852 the fortifications were completed, and were blessed by the pope with great solemnity.

Whilst the work of refortifying the city was in progress, a great fleet of the Saracens sailed for Rome, seemingly from Sardinia, but it was completely destroyed off Ostia by the allied fleets of Rome, Naples, Amalfi, and Gaeta, and by a tempest (849). When the rebuilding of the walls of Rome was accomplished, Leo rebuilt Portus, and handed it over to a number of Corsican exiles, whom the ravages of the Saracens had driven from their homes. Other cities too in the Roman duchy were fortified, either by the pope himself or in consequence of his exhortations.

Leo also endeavoured to make good the damage which the Saracen raid of 846 had done to the different churches. St. Peter’s had suffered very severely, and though as a whole it never again reached its former magnificence, Leo managed to make it in parts at least more beautiful than it had been before. St. Martin’s, where he had been educated, the Quatuor Coronati, of which he had been the priest, the Lateran Palace, the Anglo-Saxon Borgo, Subiaco, and many other places both in Rome and out of it were renovated by the energetic Leo.

The rest of the entry about Pope St. Leo IV, who liked to build things and name them after himself, recounts the various Trump-like feuds he got into with other Dark Age celebrities.