When President Trump condemned the Main Stream Media's reaction to the Democrats' coordinated riot in Charlottesville, there was much wailing and gnashing of teeth over his observation that the Founding Fathers would follow the Confederate flag. I. E. Statues of Washington, Jefferson Aren’t ‘Next,’ But It’s Complicated, Historians Say, by Dartunorro Clark, NBC, or the New York Times (above.) 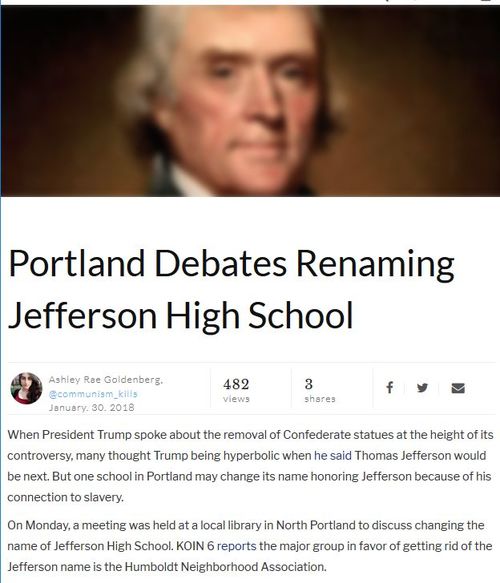 On Monday, a meeting was held at a local library in North Portland to discuss changing the name of Jefferson High School. KOIN 6 reports the major group in favor of getting rid of the Jefferson name is the Humboldt Neighborhood Association.

On the Humboldt Neighborhood Association website, the group claims many are “uninformed” about Jefferson’s history as a slave owner. The site claims that, upon surveying Jefferson’s “behaviors and writings,” they believe he supported “white supremacy” and eugenics...

Clifford Walker, the Humboldt Neighborhood Association historian, told KOIN 6 Jefferson was “probably one of the largest slave traders and dealers in African flesh.”

Walker said having the Jefferson name on the high school sends the message that “we’re not sensitive to people who are offended by those kinds of images.”

My guess is those pushing for this change are Democrats. Kevin Williamson of National Review told us some time ago that:

Democratic concern about racist totems is selective: The Democrats are not going to change the name of their party, cancel the annual Jefferson-Jackson dinner, or stop naming things after Robert Byrd, senator and Exalted Cyclops of the Ku Klux Klan.

Needless to say, the Jefferson-Jackson dinners are already being renamed and naming anything after the author of the Declaration of Independence will likely be controversial even within the Republican Party within a few months.

One of the activists pushing for the name change wants to call it the Barack Obama High School. That's too moderate. Let's just call it the Nikki Minaj University of Wakanda and get it over with.