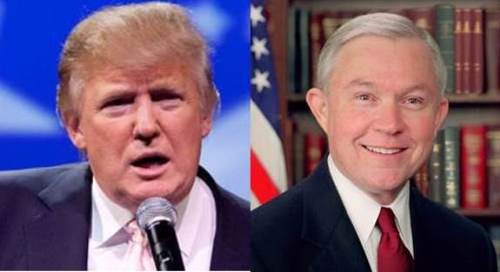 On Wednesday, Donald Trump spoke at the rally against the Iran nuke deal which took place on the west lawn of the Capitol. Following that appearance, Trump met with Senator Jeff Sessions to strategize about immigration policy. The presidential candidate could have met with anyone in Congress, so it is an encouraging sign that he prioritizes the issue enough to meet with the leading exponent of immigration enforcement in the Senate.

Below, Donald Trump conferred with Senator Sessions in the Capitol. 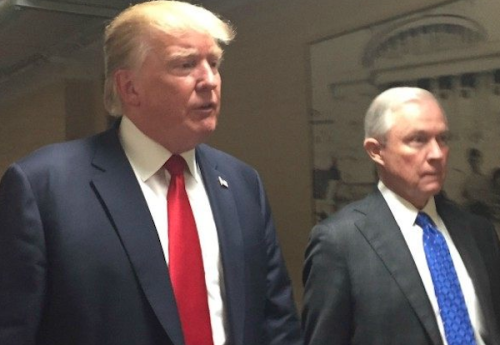 Remember that Trump invited Senator Sessions to speak at his campaign rally in Mobile a few weeks back, and proceeded to give him a well-deserved shout out as a “highly respected. . . unbelievable guy.”

Before that, Trump consulted with Sessions in the preparation of a policy paper on immigration, which is now posted on Trump’s campaign website.

It’s a good to see that Trump’s interest in immigration enforcement has staying power.

“The Senator has just been amazing on the issue,” Trump told reporters as he met with Sessions, shortly after Trump had spoken at a rally against President Barack Obama’s Iran deal.

The two met on the Capitol steps and walked inside for a confidential, unannounced meeting.

It’s time to “restore a lawful system [of immigration] we can be proud of… that’s essential, I think, at this point in history,” Sessions added.

In a clear display that the GOP frontrunner values the Senator’s support on the issue, Trump held a stadium-rally before a 30,000 crowd in the Senator’s home town of Mobile, Alabama, in which he invited the Senator to join him on stage.

Sen. Sessions is widely regarded as the gold standard on immigration reform. Sessions’ esteemed reputation on the issue has been well-earned. He led the fight to stop the immigration expansion effort of 2006 and 2007 and was the first to lead the charge to derail the 2013 Gang of Eight bill.

Trump is not the only GOP candidate to trumpet his ties to the Senator.

Sen. Ted Cruz (R-TX), for instance, has suggested he would make the Senator a member of his cabinet if Cruz were elected president. “I think Jeff Sessions would extraordinary, to be honest, in a number of positions in the cabinet,” Cruz told Cliff Sims, editor of Yellowhammer News. “I think it would be a difficult choice which would be the ideal place for him,” Cruz said.

It is not surprising that presidential candidates have sought the guidance and support of the Alabama Senator, who has quickly become the leading authority in the Republican Party on appealing to the blue collar voters who have been abandoned by their political leaders.

Trump rise in the polls is largely attributable to his ability to tap into this pro-American sentiment. “Congress is not responding to the will of the people, absolutely,” Trump said when asked about his views on the Iran deal.

Indeed, Trump’s campaign platform has focused almost exclusively on prioritizing the interests and needs of the American people.

For instance, his campaign has been fueled by a populist focus on policies that prioritize blue-collar American workers and legal immigrants already here above special interests corporatist elites, who– for decades– have pushed trade and immigration legislation that would drive down wages to increase their companies’ bottom lines.

Polling data shows that if Trump continues to message on a populist trade and immigration agenda, he will continue to see his poll numbers rise.

Trump is now winning “a huge share of the Democrats’ non-white base — 25 percent of African Americans, 31 percent of Hispanics and 41 percent of the relatively small Asian vote,” as Breitbart News has previously reported.

These polls confirm the assertions of Jamelle Bouie, chief political correspondent for liberal Slate magazine, who has explained that Trump’s wage-earner immigration platform could allow him win African-American voters. “Part of [the Republican Party’s ability to win back African American voters] might just be harnessing anxiety about immigration, about the fact that immigrants are typically filling low wage jobs, and are in some cases… competing with African-American workers,” Bouie said. “Trump, I think, might be banking on that fact. And it’s not a bad play as far as strategy goes.”