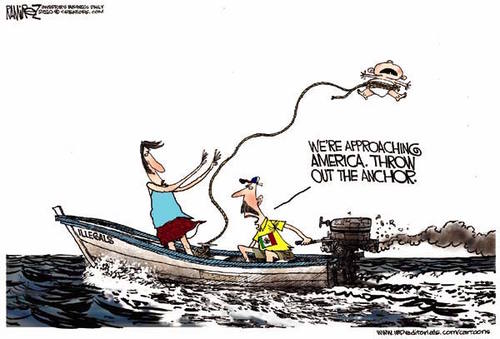 It’s depressing that America is so crippled by liberalism and political correctness that the anchor baby scam of invasion-by-birth continues and is getting worse. Trump’s declaration that as President he would end it has made a number of heads explode because the idea of America as world welfare provider accords with globalist redistribution ideology.

Breitbart reports that ripping off US citizenship is now big business, costing $99,000 for wealthy persons from Russia and Red China. Birth tourism has been going on for years, but now the internet allows information about grabbing US citizenship to be broadcast worldwide. In 2013, a maternity hotel in southern California with a Chinese clientele was closed down based on the side issue of zoning complaints from neighbors grown tired of traffic, overcrowding and sewage spills. Birth tourism is not illegal, and it shows.

Below is a good report from 2008 produced by CBS and better than anything you see now from the networks: Illegal Immigrant Births – At Your Expense.

After giving birth in south Texas on the US taxpayer’s tab ($4500), moocher Mexican Fabiola says, “I’m glad he was born here. That’s why I came here, so my children, my husband and I could have a better life.”

Geography is so convenient for Mexicans in that they can walk to America and steal all the freebies they can carry. No wonder more than 12 million of them live in the US so they can be close to the welfare office and hospital.

The Constitutional argument about what the 14th Amendment really means has become rather intense, with Bill O’Reilly proclaiming loudly that born here = citizen, period.

On the other side, author, radio host and constitutional scholar Mark Levin has been discussing the misunderstanding of the 14th Amendment. Here’s a recent radio clip:

Meanwhile, Article 1, Section 8 says that “The Congress shall have the power … To establish a uniform rule of naturalization.”

So Senator Vitter (R-LA) thinks legislation to clarify the citizenship question should suffice. It’s worth a try.

When people discuss our nation’s immigration policies, what becomes clear is that the system is broken, and tangible solutions are needed. Take birthright citizenship, for example. In addition to the hundreds of thousands of legal immigrants we admit each year, our country must also prepare for the economic, educational, health care and infrastructure responsibilities and consequences of illegal immigrants who cross the border and then have a child in the USA.

The status quo understanding of the 14th Amendment allows for a child born of illegal immigrants on U.S. soil — via birthright citizenship — to be granted full citizenship rights and access to all public and social services our society provides. That’s a lot of services.

Recently, there have been raids of “maternity hotels,” where foreign women paid exorbitant amounts of money to visit the USA in the final few months of pregnancy in order to abuse our government’s misinterpretation of the 14th Amendment. While it seems unbelievable, hundreds of thousands of babies each year are the offspring of illegal immigrants.

We need a solution. That’s why I looked closely at the 14th Amendment, which states, “All persons born or naturalized in the United States, and subject to the jurisdiction thereof, are citizens of the United States.”

“Subject to the jurisdiction thereof” seems pretty clear to me. Congress is afforded the authority to clarify the statutory language so that foreign citizens don’t take advantage of our constitutional rights. I’ve introduced legislation in the U.S. Senate to make those necessary clarifications and close the loopholes in our immigration laws to make sure that birthright citizenship is given only to the children of U.S. citizens and legal resident aliens.

It is flat out wrong for children of illegal immigrants to become U.S. citizens just because they were born here, especially when it’s justified using a false technicality of the Constitution. The only way we can move forward with immigration reform is to make sure we aren’t dropping the ball at the beginning. One place to start is preventing birth tourism and focusing on a brighter American future that admits and welcomes foreign citizens legally through a thoughtful process.