Trevor Noah: African Comedian Doesn't Get That Defending Yourself with "How Is a Fact Racist?" Is Racist 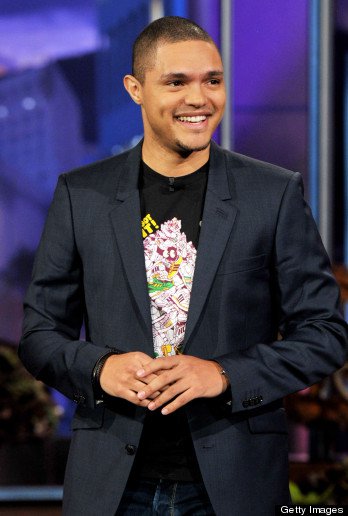 Being a fact is what makes it racist. That the designated next host of The Daily Show, Trevor Noah, doesn’t get that cornerstone of political correctness troubles a lot of nice white liberals, no matter how many Pokemon points being born in Soweto gets him.

Within hours of the announcement that he had been named the new host of “The Daily Show,” the comedian Trevor Noah was subjected to the full scrutiny of the Internet. As potential audience members scoured his past work and social media presence for more clues to Mr. Noah, a South African comedian, they uncovered many posts on his Twitter account that they deemed offensive to women or Jews.

Comedy Central announced on Monday that Mr. Noah, 31, would succeed Jon Stewart as anchor of “The Daily Show,” its satirical late-night news program, when Mr. Stewart steps down this year. Though Mr. Noah has performed stand-up comedy around the world, he is not widely known in the United States, and he had appeared as an on-air contributor to “The Daily Show” only three times before being named as host.

On Twitter, where he has had an account since 2009 and accumulated more than two million followers, Mr. Noah often posts irreverent statements that reflect his interests in popular culture, global politics and issues of race. As with many comedians, Mr. Noah’s jokes can test the boundaries of what is socially permissible and what is in bad taste.

In several posts, Mr. Noah came across as mocking or derisive of women. In one from 2011, he writes: “Oh yeah the weekend. People are gonna get drunk & think that I’m sexy!” a quote that he attributes to “fat chicks everywhere.”

In a post from last year, he quotes another Twitter user who writes, “When a woman is loved correctly, she becomes 10 times the woman she was before,” to which Mr. Noah adds: “So she gets fat?”

Mr. Noah has also posted jokes about Jews and about Israel. As he wrote in 2009, “Almost bumped a Jewish kid crossing the road. He didn’t look b4 crossing but I still would hav felt so bad in my german car!”

A post from 2010 reads, “South Africans know how to recycle like israel knows how to be peaceful.”

Reacting to some of Mr. Noah’s jokes in a post for The Daily Caller, a news and opinion website based in Washington, Jamie Weinstein, a senior editor, wrote that this tweet “does seem to suggest that Noah believes Israel is an inherently belligerent country.”

Mr. Weinstein wrote that this was a potentially dangerous attitude for a new host of “The Daily Show,” adding: “Many young people don’t watch ‘The Daily Show’ just to laugh — they watch the show to get their news. The show shapes perceptions.”

Abraham H. Foxman, national director of the Anti-Defamation League, said in a statement that he wished Mr. Noah well in his new position at “The Daily Show,” but cautioned him against perpetuating stereotypes. …

Mr. Foxman added: “We hope he will not cross the line from legitimate satire into offensiveness with jokes calling up anti-Semitic stereotypes and misogyny. And we hope that he and Comedy Central will make a conscious effort to ensure that ‘The Daily Show’ remains funny and irreverent without trafficking in bigoted jokes at the expense of Jews, other minorities and women.”

Like I’ve been saying, ethnocentric liberal Jews like Abe Foxman are starting to get worried that diversity isn’t necessarily good for the Jews. You bring in some African guy and maybe he hasn’t been trained as well in terms of where the landmines are as some Lutheran comedian from Minnesota.

Yesterday Comedy Central announced that South African comedian Trevor Noah will replace Jon Stewart as host of The Daily Show beginning in December. Curious fans of the show scrambled to learn more about Noah, whose fan base is large but not concentrated in the United States. Those people found a Twitter account (with two million followers) that included multiple instances of jokes that many deemed tone-deaf and tasteless.

There is outcry, across social media and on most news sites today. The Atlantic staff writer Spencer Kornhaber and senior editor James Hamblin discuss.

Hamblin: Are these jokes real or some kind of performance-art parody?

Kornhaber: That would be nice, if it turned out to be a parody of some sort. I guess. But it’d have to have been started back in 2009, which would make for a pretty long-running conspiracy. The first thing that strikes me about these tweets is just how inept they are as attempts at humor. They didn’t make me chuckle guiltily. They just made me embarrassed for him. Right?

Hamblin: Most of these are old, from four to five years ago, so maybe it was just his racism/sexism/anti-Semitic phase?

Kornhaber: Yeah, it’s interesting to look at the timestamps. His more recent controversial tweets are, at least, attempts at jokes, not just repeating old stereotypes. The Bruce Jenner one from last month—not exactly enlightened but, meh, fine. #BeatsByDreidel in May of 2014 indulges some not-s0-helpful thoughts about Jews controlling the world, but actually is almost a punchline, at least. The older stuff is just such a fascinating glimpse at what makes bad humor bad—the idea that you’re doing something exciting by saying something offensive, when really you’re just outing yourself as a deeply unoriginal thinker who has a tragically commonplace obsession with Jews. Or you’re outing yourself as the stereotype of a frat-bro when it comes to attitudes toward women. You have a little bit of a standup background, Jim.

“A little bit of a standup background” = Jim thought he was funny, but, it turned out, audiences disagreed.

What do you make of this stuff?

Hamblin: Even trying to take them in good faith, I hate these jokes, but it’s probably good that there’s blowback now, so Noah and everyone at The Daily Show can be better in the future. So without implying that historical precedent is a defense of bigotry, look at Bob Hope. He was beloved in the 1950s, but most of his comedy doesn’t hold up today at all. From 1970:

Pause for laughter. Richard Zoglin argues in his biography that Hope was just a relic of vaudeville, where he got his start, which involved a lot of blackface and one-liners about the incompetence of women—the kinds of jokes that are not jokes at all really, just gags that rely on a high hat to tell people when to laugh.

Hope was adored in his prime, but then his misogyny fell out of style, and his fans and the industry largely disowned him. Things are still getting better, but the root of a lot of comedy today comes from broad generalizations about people. It’s cool to be able to spot behavioral trends and call them out, but doing it along racial and gender lines is, to use your favorite word, almost always in some way problematic.

Can’t we all just make jokes about the marketing of Pop Tarts and the people who deny that humans are producing carbon that is changing the climate in terrible ways? Or, sorry, about that logic, not those people. Even though they are all ugly people. Taking the high ground in terms of subjects that deserve to be made fun of—e.g. not obese women or the Jewish people as a whole—is coming in style so hard, which is cool. Not just Stephen Colbert and John Oliver, but even Seth Meyers is taking on stuff like Indiana’s “religious freedom” law in a five-minute rant on civil-rights laws. So many white dudes in suits at desks making important commentary-jokes. Johnny Carson would not have done that.

Kornhaber: Yeah, it’s good to keep the broader comedy context in mind. (Also, step off, I challenge you to find me ever using the word “problematic” in earnest.) As Roxane Gay pointed out on Twitter, lots and lots of beloved comics have said dicey things, made identity jokes, etc. Jon Stewart himself often walked the line on The Daily Show. So singling out Noah—a comedian who, blessedly, is of a different background than those who usually take up late-night host spots—doesn’t help anyone. Like I said, his Jew/women tweets come from a common phenomenon: the mistaken belief that saying something wrongheaded is the same as saying something transgressive. The best comics, from Dave Chappelle to Stephen Colbert to Tina Fey, talk about identity in original ways, making the joke be on the larger culture and not on the individual group.–

Yeah, right … Did anybody watch the last four years of Fey’s 30 Rock?

As for Chappelle, he started out making fun of black people for black audiences because that’s what blacks find funny — blacks. Then he transferred his act to national audiences on TV, and a bunch of white facilitators assured him that white people were only laughing at his jokes about black people in a meta-fashion, they were laughing at white stereotypes about blacks, or something. So reassured, he went on making fun of black people until a blue collar white stagehand laughed in a really not-meta fashion at one of his jokes about black people, at which point he realized his white handlers had been lying to him, he had a mental breakdown, and walked out on his $25 million per year contract.

Hamblin: So what’s to be done here? Nothing? Is comedy going to just get forcibly higher brow until every late-night show is tackling net neutrality and hiring investigative journalists as writers?

Kornhaber: He should explain the thinking behind some of those jokes and whether he still holds to that thinking. He should probably offer an apology. More important, though, would be a vow from him to try harder—to be more creative, more insightful, funnier. Because insight, something that a program like The Daily Show prides itself on offering, doesn’t jibe with perpetuating racism or sexism, which are, at core, stupid belief systems. I don’t want more sanitized humor; I just want humor that gets how funny the world actually is.