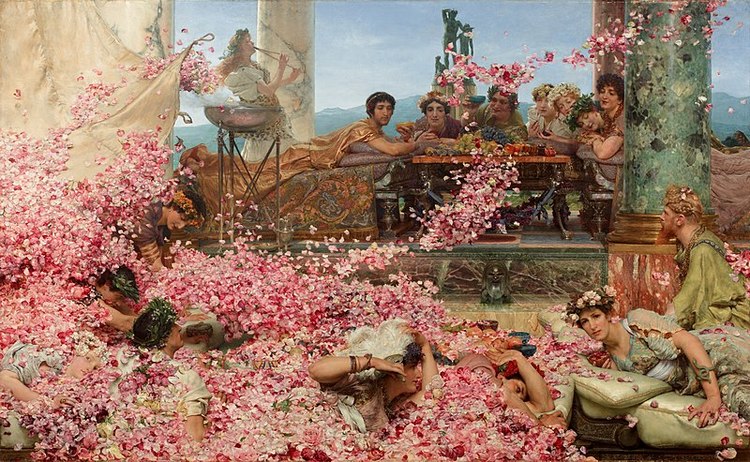 In an era when Progressives have lost interest in the working class in favor of ever more exquisitely tiny minorities, we’re starting to see a revival of interest in the fabulous transgender Roman emperor Heliogabalus (a.k.a., Elagabalus), c. 203 A.D. to 222. Who better to represent the trend on the left away from concern for dreary coal miners than a Roman Emperor as Victim?

Elagabalus has long appealed to decadents, such as late 19th Century French writer J.K. Huysmans. as the ultimate in decadence, self-absorption, and shock value. Currently, Marilyn Manson is promoting his new album “The Pale Emperor” in interviews with references to a book about Heliogabalus given to him by Johnny Depp.

But it will be interesting to see if the recent uptick of interest in the Emperor/Empress can succeed in eventually recasting even him/her as a virtuous victim?

A teenage boy placed on the throne by his rich Syrian grandmother, he quickly made himself unpopular via his whims. His grandmother then forced him to adopt his more normal cousin as his heir, and when he tried to get rid of his cousin and ordered the execution of anyone who cheered his cousin, his Praetorian guard murdered him and put his cousin on the throne.

All the accounts of Elagabalus that have come down to us were written by historians who opposed him politically, so their lurid content may be exaggerated. Edward Gibbon noted in The Decline and Fall of the Roman Empire:

Even the credulous compiler of his Life, in the Augustan History (p. 111), is inclined to suspect that his vices may have been exaggerated.

The master of the Roman world affected to copy the dress and manners of the female sex, preferred the distaff to the sceptre, and dishonoured the principal dignities of the empire by distributing them among his numerous lovers; one of whom was publicly invested with the title and authority of the emperor’s, or, as he more properly styled himself, of the empress’s husband. It may seem probable, the vices and follies of Elagabalus have been adorned by fancy, and blackened by prejudice. Yet, confining ourselves to the public scenes displayed before the Roman people, and attested by grave and contemporary historians, their inexpressible infamy surpasses that of any other age or country.

Elagabalus’ sexual orientation and gender identity are the subject of much debate. Elagabalus married and divorced five women … According to Cassius Dio, his most stable relationship seems to have been with his chariot driver, a blond slave from Caria named Hierocles, whom he referred to as his husband.

The Augustan History claims that he also married a man named Zoticus, an athlete from Smyrna, in a public ceremony at Rome. Cassius Dio reported that Elagabalus would paint his eyes, epilate his hair and wear wigs before prostituting himself in taverns, brothels, and even in the imperial palace …

Herodian commented that Elagabalus enhanced his natural good looks by the regular application of cosmetics. He was described as having been “delighted to be called the mistress, the wife, the queen of Hierocles” and was reported to have offered vast sums of money to any physician who could equip him with female genitalia. Elagabalus has been characterized by some modern writers as transgender, perhaps transsexual.

By 221 Elagabalus’ eccentricities, particularly his relationship with Hierocles, increasingly provoked the soldiers of the Praetorian Guard.

So he was a victim of prejudice.

He (or as some more contemporary commentators insist upon calling him, she) was also a victim of race and ethnic prejudice. As the first Roman emperor born in Asia, Elagabalus more than fulfilled ancient Roman stereotypes of the effeminacy of the East.