Topic of Excess Immigration Missing from Mainstream Poll about Poverty

A vexing problem with mainstream media is their lack of interest in the connection between excessive immigration and poverty. Apparently they never heard of supply and demand, even though the captains of industry know the principle very well. (Hint, an oversupply of workers leads to lower wages and big business profits.)

Analysts have said for years that the mass immigration of Third Worlders is importing poverty, so the concept is not exactly new.

Here’s a recent NBC poll asking what the little citizens think is the cause of poverty, with eight possible answers. But a top category is curiously missing. (Accompanying text regarding the flawed survey: Many Americans blame ‘government welfare’ for persistent poverty, poll finds, NBC, June 6, 2013.) 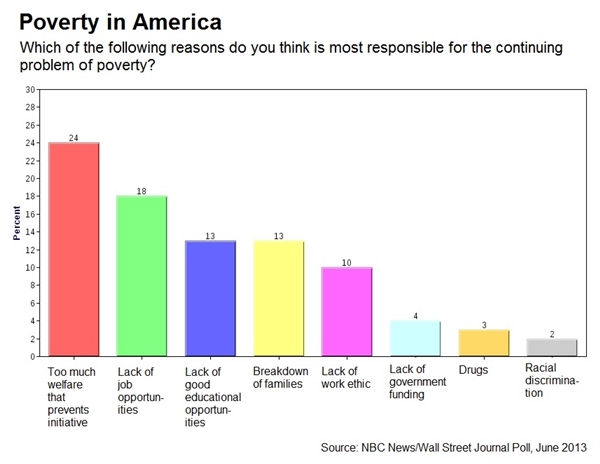 Professor George Borjas prepared a paper in April on the labor aspect of immigration, Immigration and the American Worker. Following is a pertinent point:

Although the net benefits to natives from illegal immigrants are small, there is a sizable redistribution effect. Illegal immigration reduces the wage of native workers by an estimated $99 to $118 billion a year, and generates a gain for businesses and other users of immigrants of $107 to $128 billion.

Finally, polls can be very informative when proper questions are asked. A 2011 Rasmussen survey found that 61 percent of voters thought enforcing immigration law would decrease poverty.

A new Rasmussen Reports national telephone survey finds that 61% of Adults say if immigration laws were enforced, there would be less poverty in America. Only 19% disagree with that assessment, while 20% are not sure.