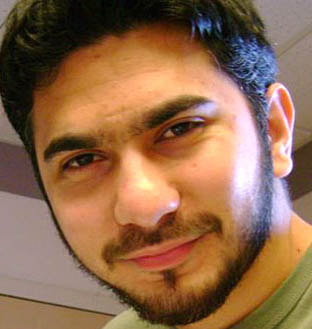 The police work leading to the rapid arrest of Faisal Shahzad (shown) has been top notch, to the point where it has been hard to keep up with all the information spurting out all day regarding the bomb that was planted in Times Square Saturday evening.

Important points: the perp is a born-in-Pakistan immigrant who entered this country on a college visa in 1999 and was naturalized as a citizen a year ago. After that he returned to Pakistan for several months during which time he did post-graduate work in Islamist bomb-making:

We have picked up a few family members” related to Faisal Shahzad, the chief suspect in the attempted attack, a security official in Karachi said. A friend of Shahzad was also arrested.

Shahzad, a 30-year-old Pakistani-American, was arrested late on Monday at John F. Kennedy International Airport in New York after being removed from a plane as it was about take off for Dubai, U.S. officials said.

Another intelligence official in Pakistan said Shahzad received militant training in northwest Pakistan near the garrison town of Kohat. The area around Kohat is a stronghold of Tariq Afridi, the Pakistani Taliban commander in the region.

As usual, the apologists swung into high gear. The terrorist-friendly Council on American Islamic Relations (CAIR) hardly had time to carp about non-existent backlash because Mayor Michael Bloomberg beat them to it by declaring, “I want to make clear that we will not tolerate any bias or backlash against Pakistani or Muslim New Yorkers. All of us live in this city, and among any group, there is always a few bad apples.”

Nevertheless, CAIR went ahead with a press release that “welcomed” the arrest of Shahzad, while warning against the dreaded “backlash” against those peaceful Muslims about which we hear so much. As usual, a hostile Muslim attempted to murder hundreds of Americans, yet the Sons of Allah claim they are the victims.

Going forward, it will be interesting to learn whether the would-be bomber was driven to kill by the so-called insult to Islam of the recent controversial South Park cartoon. The bomb was left near the Viacom offices, the company which owns Comedy Central. Yes, the South Park episodes ripping Mohammed were wicked-funny, but that was the idea. The fact that Muslims were infuriated by the jokes, leading at least one to make threats, illustrates one of the many reasons why Muslims are too culturally dissimilar to immigrate to societies which value free speech.