Even though there has been a tsunami of false reporting from the liberal media characterizing the new Arizona immigration law as racist oppression, the American people are not impressed by the illegal aliens making noisy demands for amnesty. The citizens’ desire for immigration order is revealed by the recent Rasmussen poll, which showed only a quarter of those polled were positively inclined toward the Raza squawkers.

25% Have Favorable Opinion of Immigration Rights Protesters, 50% Unfavorable, May 4, 2010

Following weekend protests against the new Arizona law cracking down on illegal immigration, support for the Arizona policy remains unchanged.

However, a new Rasmussen Reports national telephone survey finds that only 25% have a favorable view of those who marched and protested for immigrant rights in major cities. Fifty percent (50%) hold an unfavorable opinion and another 26% are not sure.

Fifty-nine percent (59%) of voters still favor legislation like Arizona’s that authorizes local police to stop and verify the immigration status of anyone they suspect of being an illegal immigrant. Thirty-two percent (32%) oppose such a law. Those figures are virtually unchanged from a week ago.

The support remains even though 57% of voters are at least somewhat concerned that efforts to identify and deport illegal immigrants will end up violating the civil rights of some U.S. citizens. Forty percent (40%) do not share that concern.

Those figures include 27% who are Very Concerned about possible civil rights violations and 17% who are not at all concerned.

Fifty-seven percent (57%) also continue to support a welcoming immigration policy that only keeps out ”national security threats, criminals and those who would come here to live off our welfare system.” Twenty-six percent (26%) do not agree with that goal for U.S. immigration policy. Seventeen percent (17%) more are not sure. [...]

As on many issues, there is a wide gap between the Political Class and Mainstream Americans. Seventy percent (70%) of Mainstream voters support legislation that authorizes local police to stop and verify the immigration status of anyone they suspect of being in the country illegally. Sixty-six percent (66%) of the Political Class oppose such a law.

This helps explain the difficulty Congress has in coming up with immigration reform legislation that passes muster with voters. Eighty-one percent (81%) of Mainstream voters continue to view controlling the border as the top priority of any such legislation, while 70% of the Political Class say legalizing the status of the millions of undocumented workers already in the country is most important.

Below is a photo I took on Saturday at San Francisco’s May Day Marxican extravaganza, where the commie icon Che was quite popular. Is flaunting such extremist views a good way to win friends and influence people? 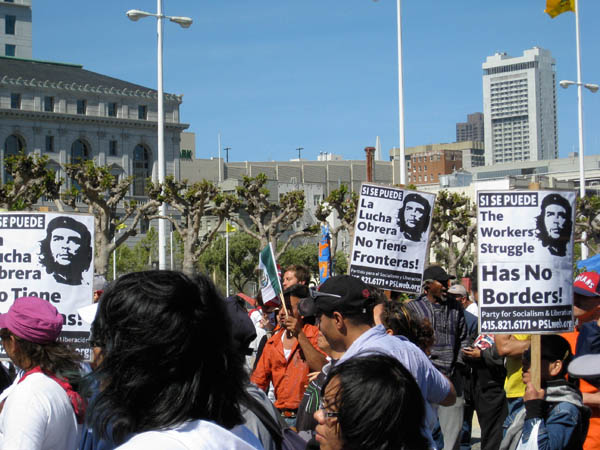