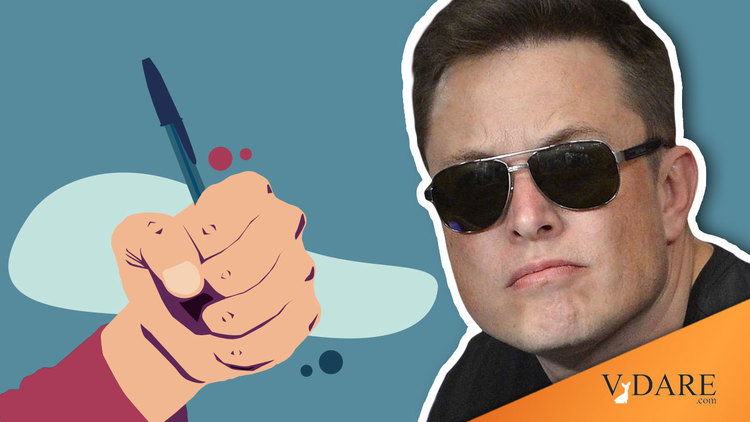 Our elites hate you. It’s that simple.

They say that something is worth what someone will pay for it.

If that’s true, then protecting “free speech,” which Elon Musk has cited as a central reason he agreed to buy Twitter for $44 billion this week, may be worth twice as much as solving America’s homelessness problem, and seven times as much as solving world hunger. It’s worth more (to him, at least) than educating every child in nearly 50countries, more than the GDP of Serbia, Jordan, or Paraguay.

In the days since Musk agreed to terms on a deal to take Twitter private, nearly all of Musk’s tweets have been about freedom and censorship on the platform. Like: By ‘free speech,’ I simply mean that which matches the law. I am against censorship that goes far beyond the law.” Or: “Truth Social (terrible name) exists because Twitter censored free speech.” And: “the extreme antibody reaction from those who fear free speech says it all.”

Why does Musk care so much about this? Why would a guy who has pushed the boundaries of electric-vehicle manufacturing and plumbed the limits of commercial space flight care about who can say what on Twitter?

“Freedom of speech” has become a paramount concern of the techno-moral universe. The issue has anchored nearly every digital media debate for the last two years, from the dustup over Joe Rogan at Spotify to vaccine misinformation on Facebook. Meta founder Mark Zuckerberg gave a major speech at Georgetown in 2019 about the importance of “free expression” and has consistently relied on the theme when explaining why Facebook has struggled to curb disinformation on the platform.

“It does seem to be a dominant obsession with the most elite, the most driven Elon Musks of the world,” says Fred Turner, professor of communication at Stanford University and author of several books about Silicon Valley culture, who argues that “free speech seems to be much more of an obsession among men.” Turner says the drive to harness and define the culture around online speech is related to “the entrepreneurial push: I did it in business, I did it in space, and now I’m going to do it in the world.”

Business itself may be part of the motivation. Many of the most valuable digital platforms have business models that rely on mining user content for data and selling it to advertisers. From the platform’s perspective, more speech equals more cash.

But “free speech” in the 21st century means something very different than it did in the 18th, when the Founders enshrined it in the Constitution. The right to say what you want without being imprisoned is not the same as the right to broadcast disinformation to millions of people on a corporate platform. This nuance seems to be lost on some techno-wizards who see any restriction as the enemy of innovation.

In a culture that places a premium on achieving the impossible, some tech titans may also see the liberal consensus on acceptable speech as yet another boundary to break. In Silicon Valley, bucking the liberal conventions about harmful speech can seem like the maverick move.

“Contrarianism is a big part of this free speech thing. If the left says, ‘I can’t do XYZ,’ that makes a lot of people want to do it more,” says Peter Hamby, host of Good Luck America on Snap and writer at Puck News. “Contrarianism, whether it’s embodied by Elon Musk or Andrew Yang or Bernie Sanders or Joe Rogan, becomes this ideology in itself.”

Jason Goldman, who was on the founding team at Twitter and served on the company’s board from 2007 to 2010 before joining the Obama Administration, says the tech rhetoric around free speech has become an obsession of the mostly white, male members of the tech elite, who made their billions in the decades before a rapidly diversifying workforce changed the culture at many of the biggest companies in Silicon Valley.

They “would rather go back to the way things were,” Goldman says, “and are couching that in terms of ‘free speech’ or ‘we’re not going to allow politics to be part of the conversation.’”

Goldman says it’s “naive” to believe that Musk can throw out Twitter’s guardrails without degrading the platform. “To say you’re just going to allow for any type of abuse or harassment,” he says, “is an inherently anti-speech position, because you’re going to drive out a set of users who would use your product but no longer feel safe.”

Tech titans often have a different understanding of speech than the rest of the world because most trained as engineers, not as writers or readers, and a lack of a humanities education might make them less attuned to the social and political nuances of speech.

“Tech culture is grounded in engineering culture, which imagines itself as apolitical,” says Turner. Engineers, he adds, often see the world in terms of problems and solutions, and in that context, speech becomes a series of data points that get circulated through a data system, rather than expressions of social or political ideas.

Focusing on “free speech,” as a way to justify relaxing restrictions on the platform, he says, is just “an engineering solution to a political problem.”

Whether it’s an engineering problem or a political one, it’s Elon Musks’s [sic] problem now.

”free speech has become an obsession of the mostly white, male members of the tech elite…”

In a society where the very idea of whiteness is synonymous with evil, daring to believe speech is free because you believe white people have any rights is now, in the eyes of this writer from Time, yet another unpardonable offense added to the ledger of white men.

Such an idea is anathema in 2022 America.