Typically, professional Catholic handwringers fret about Mexicans suffering in Mexico, and conclude it’s America’s fault. The specific Mexicans are deported individuals, so they are willful lawbreakers exhibiting hostility to American sovereignty and to the people of this country.

Tijuana’s tent city of deportees, aka La Mapa, is filled with hundreds of dome camper tents. 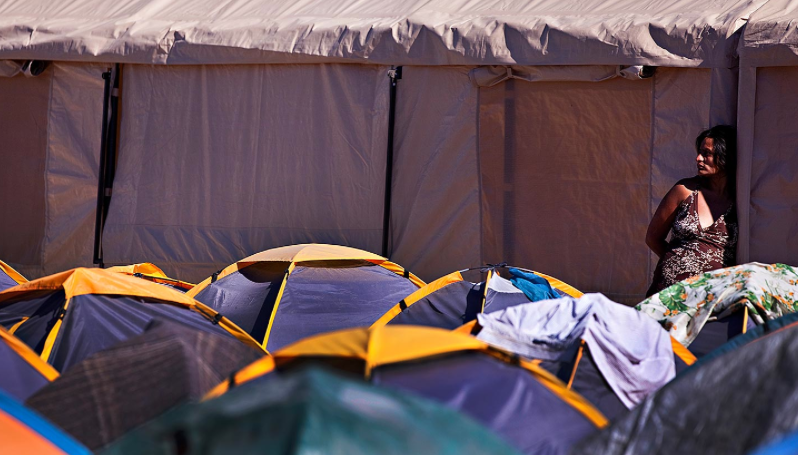 Plus, the writer insists upon calling them “refugees” as if they were victims rather than persons who created their own unfortunate situation through lawbreaking.

The “refugee” usage is only one of a number of melodramatic, inaccurate characterizations.

Tijuana is home to a massive number of refugees awaiting a chance to return to the United States after being deported. Many of those refugees are making their homes in a semi-permanent tent city where drugs and violence are rampant.

LOS ANGELES, CA (Catholic Online) – As a virtual civil war continues in Mexico and the economy improves in the U.S., illegal immigrants are once again eying the United States as a destination for a better life. those who are caught are dumped in Tijuana where they must settle into a tent city.

Although many are entering the country illegally, they are doing what they can to assimilate. In the infamous “El Mapa” tent city in Tijuana, more than half of the residents speak English and have family waiting for them north of the border.

California authorities say most of the deportees, about two-thirds, have criminal convictions. This appears to be true, except those criminal convictions are not for violent crimes. Many are for misdemeanors including traffic infractions. A full one-third have no criminal record at all.

Mexican immigrants are lured to the United States with the tempting prospect of work and an opportunity to raise children in a place that isn’t riddled with gang violence. The southwestern border of the U.S. has always been porous with waves of immigrants passing both directions with the seasons since people can remember.

When Mexicans settle en masse in the United States, gang violence often follows. They bring it.

In many southwestern communities, the Christmas break at schools has been adjusted to accommodate this migration as many native Mexicans travel home for Christmas, emptying some schools of their students.

Not all of the immigrants into the United States enter the country legally, and a crackdown on illegal immigration, fueled by a prolonged recession for Middle America has led to an increase in the apprehensions of illegal immigrants. These people arrested in California are eventually dumped unceremoniously across the border in Tijuana.

Even foreign nationals from other Latin American countries are dumped into Mexico, a display of crass racial insensitivity.

Is the US supposed to supply free plane rides to the country of origin? The foreigners can get home the same way they got to America, on their own dime.

For most of these people home isn’t in Mexico, but across the border in California. Most have families waiting for their return. With no place to go, they have settled by the hundreds into tent cities like El Mapa where the chief amenity, according to Al Jazeera America, is a porta-potty.

No, the deportees’ homes are in the countries of citizenship. They have a “place to go.”

Fed by activist groups, the people are left to fend for themselves and try to cross back into the states. Some, financed by relatives across the border, pay coyotes to illegally smuggle them across the border. Unfortunately, coyotes are human traffickers affiliated with criminal gangs. It’s an expensive and dangerous proposition.

In the tent city, despair quickly seizes new arrivals. Depressed and desperate many turn to drugs to quell their anxiety and depression. Before long, violence and even murder occur. Police also harass the residents who are generally unwanted and seen as a blight.

Victims! At least according to liberal elite Catholic-think.

The Catholic Church continues to petition the U.S. government for a compassionate and speedy immigration reform plan, however policymakers have stalled and nothing is forthcoming soon.

Although illegal immigration is itself a crime, compassion must outweigh, especially when people who have lived productively and without committing subsequent crimes (beyond entering the country illegally) have formed families in the United States. The politically popular deportations have a very real cost in human terms.

For anyone who sees El Mapa with their own eyes, this is a stark and brutal truth.

The tent city is crime barrio, but Catholic.org makes excuses for the Mexicans’ behavior and wants the big Senate amnesty that would welcome back criminal aliens who have been deported.