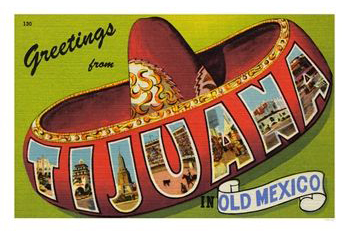 I love a happy deportation story, where the illegal aliens go home and readjust to living among their own people and speaking their own language 24/7. We know those things are important to foreigners because they complain endlessly about having to adjust to an English-speaking nation filled with Americans in order to mooch money and benefits from the United States.

A long-time favorite example of deportation success is the San Francisco Chronicle series that followed the Cuevas illegal alien family back to the Philippines where they found a civilized place and lots of relatives.

Good luck to all deportees. May you be so happy that you never think of America again.

Today’s heartwarming homecoming was written by Sam Quinones, a long-time observer of Mexican cultural byways. (See my review of his book “Antonio’s Gun and Delfino’s Dream” in the Fall 2007 Social Contract titled “Illegal Immigration: the Mexican Way to Self-Esteem.”)

The deportation angle is actually a device to introduce the new, improved Tijuana: the crime-battered border city is coming back from the brink. Go Mexico!

Tijuana, Mexico — IN Tijuana the other day, I met a waitress named Mari.

Mari had left her home in Acapulco to cross illegally into the United States in 1999, but was deported three years ago to Tijuana. It had been a long time since she had seen her mother, so she went home to visit. But down in Acapulco, wages were low, work was scarce and violence was widespread. Then men raped her on a beach one night.

Mari fled back to Tijuana. Her waitress job, with tips, she told me, allows her to earn far more than she could scrape together in Acapulco, or in a Monterrey factory, where she worked for a time. And, after several years of savage drug violence, there’s peace in Tijuana now.

“This is my land of opportunity,” she said. “There’s more work here and it pays better.”

One reason I love Tijuana is that you can have this kind of conversation here.

Tijuana is not pretty. A city of 1.3 million people, it is chaotic, grimy, unplanned, loud, and it smells bad. It possesses none of the colonial architecture or history of Morelia, Oaxaca City or Zacatecas, across Mexico’s interior. On the contrary, most of its neighborhoods, stacked across alarmingly steep hills, are less than 40 years old.

But Tijuana’s beauty lies deeper, and has to do with why the town is flourishing now.

Only a few decades ago, Tijuana was a blank slate, a small coastal outpost on the California border. It had none of the old elites, family business groups bent on preserving their power and wealth.

Instead, it was folks beaten down by Mexico who came by the millions to, and often through, Tijuana. Desperate and possessing only their own wits and capacity for work, they brought a dynamism that Mexico had stifled but Tijuana found use for. Those who stayed found a new world and many moved up into the middle class in a lifetime.

It helped that Tijuana is the Mexican city farthest from Mexico City. Tijuana tolerated far less of the desiccated pomp and protocol, the reverence for title, that has suffocated so many fine ideas and sharp minds in the capital, which is the center of the country in almost every way, good and bad. To be far from Mexico City, particularly to the north, was once considered to be virtually not Mexican at all. Federal bureaucrats from Mexico City for years only unwillingly left the center of power. They were paid extra to go to Tijuana. But that distance gave Tijuana oxygen. There’s an old saying about Mexico: So far from God, so close to the United States. There’s some truth to that. But the last few decades have shown that, for poor Mexicans, the truer riff is, “Farther from Mexico City, closer to God.”

Immigrants, fleeing north for decades, have demonstrated that. So has Tijuana, which has been Mexico’s best domestic factory at turning the poor into the middle class.

Crucially, of course, the city is face-planted up against the United States. Early in the town’s history, in fact, it was easier to get to Tijuana from San Diego than from elsewhere in Mexico, where the winding road from Mexicali took most cars a week. Until several decades ago, Tijuana used dollars, not pesos.

But Tijuana drew more from the United States than the dollars of debauched American tourists. Tijuanans had the graciousness to overlook tourists’ behavior as they peered north and glimpsed a different way of doing almost everything — art, business, government, education.

Today, the city has a deeper tradition of private giving than most in Mexico, where the central government discouraged philanthropy, seeing it as competition to its own power. Listening to San Diego public broadcasting, and drawing from the example of nonprofit arts groups there, Tijuana’s middle classes have created one of Mexico’s most vibrant opera scenes. They did this with very little government assistance — a rarity among Mexican arts groups. Their Opera in the Street Festival attracts close to 10,000 people every July. It takes place a few blocks from the wall between the two countries in Colonia Libertad, a vast neighborhood where the city’s human smuggling industry first took root and many houses have that sagging-wedding-cake look.

Tijuana does have a brutal, cynical side. Rural folks fled their destitute villages in Mexico’s interior. But in Tijuana, they were quickly mashed into an industrial work force, living in shantytowns without basic services such as sewers or drinking water, and doing tedious production-line work assembling goods for American consumers.

IN addition, Mexico’s corrupt political culture and American tourists’ taste for the forbidden allowed a sinister underworld to develop, trafficking people and substances to gringos. For a while, this side of Tijuana strangled the city.

By 2007, the reigning Arellano Félix family’s drug cartel was disintegrating, and a fight for control ensued. Bodies piled up. Evil men emerged. One’s nickname was El Muletas — Crutches — because he left people crippled. Another cartel member was known as El Pozolero — the Soupmaker. His job was to dissolve the corpses of rivals in a chemical soup; he admitted to liquefying some 300 bodies when he was captured in 2009. Tijuana was paralyzed by curfews, kidnappings of doctors and dentists, and reports of mass slaughters. American tourists ceased coming. Many in the middle class fled.

But the medieval bloodshed receded in 2010, and since then the town’s open and effervescent essence has revived.

Most shops selling velvet paintings and naked-lady playing cards died after the Americans stopped coming. But the tourist drag, Avenida Revolución, is now repopulating with daring restaurants, microbreweries, boutiques and art galleries. They are owned by hipsters using the strip’s now cheap rents, and the confident risk-taking culture that Tijuana handed down to them, to cater to the local market of middle-class young people just like them.

Ecosystems of high-tech start-ups and avant-garde artists are emerging. So, too, is a new generation of filmmakers, using Canon 60Ds to mine the documentary raw material the city offers.

Decades after rising from the coastal desert, Tijuana finally has something like a history. More important, it has emerged from its darkest days to return to its roots as that rare place within Mexico where poor people like Mari can find refuge and a future.

Sam Quinones is a journalist based in Los Angeles and the author of “Antonio’s Gun and Delfino’s Dream: True Tales of Mexican Migration.”