Tiger Parents Riot In China: "No Fairness If You Do Not Let Us Cheat."

Malcolm Moore reports from China for The Telegraph:

What should have been a hushed scene of 800 Chinese students diligently sitting their university entrance exams erupted into siege warfare after invigilators tried to stop them from cheating.

The relatively small city of Zhongxiang in Hubei province has always performed suspiciously well in China's notoriously tough "gaokao" exams, each year winning a disproportionate number of places at the country's elite universities.

Last year, the city received a slap on the wrist from the province's Education department after it discovered 99 identical papers in one subject. Forty five examiners were "harshly criticised" for allowing cheats to prosper.

So this year, a new pilot scheme was introduced to strictly enforce the rules.

When students at the No. 3 high school in Zhongxiang arrived to sit their exams earlier this month, they were dismayed to find they would be supervised not by their own teachers, but by 54 external invigilators randomly drafted in from different schools across the county.

The invigilators wasted no time in using metal detectors to relieve students of their mobile phones and secret transmitters, some of them designed to look like pencil erasers.

A special team of female invigilators was on hand to intimately search female examinees, according to the Southern Weekend newspaper.

Outside the school, meanwhile, a squad of officials patrolled the area to catch people transmitting answers to the examinees. At least two groups were caught trying to communicate with students from a hotel opposite the school gates.

For the students, and for their assembled parents waiting outside the school gates to pick them up afterwards, the new rules were an infringement too far.

As soon as the exams finished, a mob swarmed into the school in protest.

"I picked up my son at midday [from his exam]. He started crying. I asked him what was up and he said a teacher had frisked his body and taken his mobile phone from his underwear. I was furious and I asked him if he could identify the teacher. I said we should go back and find him," one of the protesting fathers, named as Mr Yin, said to the police later.

By late afternoon, the invigilators were trapped in a set of school offices, as groups of students pelted the windows with rocks. Outside, an angry mob of more than 2,000 people had gathered to vent its rage, smashing cars and chanting: "We want fairness. There is no fairness if you do not let us cheat."

According to the protesters, cheating is endemic in China, so being forced to sit the exams without help put their children at a disadvantage.

These stories out of the East, such as the recent SAT administration being cancelled across South Korea due to rampant cheating, may add some insight into recent trends within the U.S.. In the four decades I've followed test scores by ethnicity, the biggest single change has been Asian-Americans pulling away in the 21st Century. Here's a graph from Unsilenced Science: 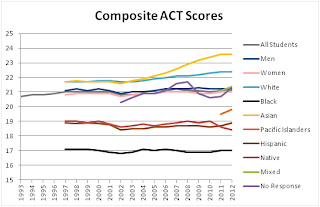