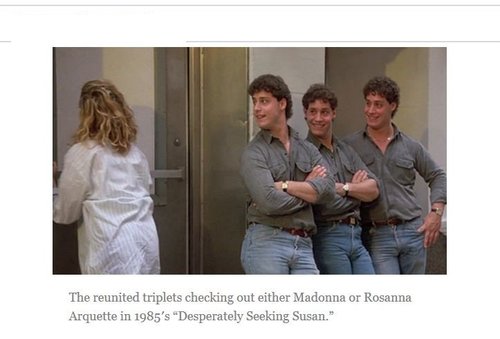 From the Times of Israel:

Reunited as adults, brothers discovered they were separated in the 1960s as part of a ‘nature versus nurture’ social experiment

PARK CITY, Utah (AFP) — If it were a conspiracy thriller it would be dismissed as far-fetched, but Tim Wardell’s astonishing story of Jewish triplets separated at birth and reunited by pure chance is all too real.

His debut feature documentary “Three Identical Strangers,” which premiered at the Sundance Film Festival on Friday, introduces Bobby Shafran, Eddy Galland, and David Kellman, who had no idea they were triplets until the age of 19.

But don’t expect “The Parent Trap,” for this altogether darker film shows how the trio’s joyous reunion set in motion a chain of events that unearthed a conspiracy that went far beyond their own lives. …

The triplets, it turned out, were among a number of identical siblings split up as part of a dark 1960s “nature versus nurture” social experiment led by psychoanalyst Peter Neubauer of the Jewish Board of Family and Children’s Services in Manhattan.

Visits by researchers throughout their childhoods were explained away as a “child development study” when in reality Neubauer was scrutinizing the brothers’ personalities and relationships with their very diverse adoptive families.

Neubauer was a Freudian psychoanalyst from Austria. From Lawrence Wright’s 2007 book Twins:

Neubauer believed at the time that twins posed such a burden to parents, and to themselves in the form of certain developmental hazards, that adopted twins were better off being raised separately, with no knowledge of their twinship.

I have a stereotype in my head that early to mid-20th Century German-speaking social scientists and psychologists had all sorts of cranky dogmas about child-raising. Freud, for example, thought the toilet training experience was incredibly important for the rest of your life. They didn’t necessarily agree with each other about whether, say, autism was caused by “refrigerator mothers” or the like, but they tended to hold their idiosyncratic prejudices with immense self-confidence. And Americans were too in thrall to the idea that a German Accent = Science to offer needed resistance. (Sometimes they were right, e.g., Einstein, other times they were mostly wrong, e.g., Freud or Jung.)

Neubauer also recognized the exceptional research possibilities such a separation offered. Studies of twins reared apart are one of the most powerful tools that scholars have to analyze the relative contributions of heredity and environment to the makeup of individual human natures. Identical twins are rare, however, and twins who have been separated and brought up in different families are particularly unusual. Neubauer was aware of a mere handful of studies examining twins reared apart, and in most cases the twins being studied had been separated for only part of their childhoods and were reunited at some point long before the study began.

Apparently, Neubauer intervened to get the four pairs of twins and these triplets separated by adoption agencies rather than wait around for adoptive parents willing to take both or all three. This didn’t seem all that dubious back then because the reigning prejudices of the time favored Nurture over Nature, so splitting them up into families where they’d have more resources from the parents because there was only one of them seemed like the right thing to do.

Today, in the wake of the famous Minnesota Twins study started by Thomas J. Bouchard, the feeling is usually that identical twins like being with their twin, even if they sometimes get on each other’s nerves due to intense sibling rivalry. (Bouchard’s study, unlike Neubauer’s more proactive and intrusive one, only looked retrospectively at “naturally-occurring” separated twins who had reunited for their own reasons.)

… The agency that placed the children shortly after their birth informed the potential adoptive parents that the girls were already involved in a study of child development, and the parents were strongly urged to continue it; however, neither the parents nor the girls themselves would ever be told that they were twins.

The records of this small study have been sealed from scientific review until 2066.