Thousands of Blacks Line Up for Section 8 Vouchers in Portsmouth, Va: Event Canceled Because of the Fear of a Riot

As you read this sentence, consider this melancholy fact: tens of thousands of organizations exist in America dedicated to making life easier for non-whites. Conversely, these organizations, many funded with your tax dollars or through foundations solely existing because of your consumer purchases, are simultaneously working to make life harder for white people.

Countless groups exist, once again with many funded via your tax dollars or through foundations solely existing because of your consumer purchases, dedicated entirely to advancing the interests of non-whites; an oft-mentioned side effect of this "noble" crusade is trampling upon the interests of white people.

If you were to even publicly state white people have collective interests, so-called conservatives would call you a progressive for daring to contradict the teachings of St. Ayn Rand, whose theology dictates only Statists would think in such tyrannical terms.

In a more refined time period, we might classify this above scenario as slavery, a subjugated people working to ensure their masters have a life of leisure, pleasure, a never-ceasing accumulation of assets.

Well, in our case, redistributed assets.

With the disparity in wealth between white people and non-whites a cause of great concern for those dedicated to advancing the interests of non-whites, the only possible solution to dissolving white wealth (with the seizing of assets a possible solution obviously considered) is to destroy the equity in homes owned by white people and the long-term viability of majority white communities. 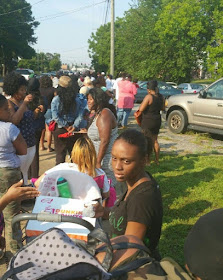 Thousands of blacks lined up to get Section 8 vouchers in Portsmouth, Virginia, hoping to live near white people and, via racial osmosis, become successful too!

Enter the Section 8 voucher, a means to weaponize non-whites and project them into white communities for a form of warfare as of yet unidentified.

One problem: a large group of blacks lining up for benefits prompts a "concern for citizens safety".

Event cancelled after hundreds line up for Section 8 housing applications, WAVY.com, May 27, 2016:

Hundreds of people lined up Thursday morning for affordable housing applications in Portsmouth.

Deputy Executive Director Kathy Warren told WAVY.com they did that out of concern for citizens safety.

Det. Misty Holley with Portsmouth Police tells WAVY.com several fights broke out at the event, but no arrests were made. An EMS unit was dispatched for some people who were having heat-related issues.

The Portsmouth Redevelopment and Housing Authority announced on May 10 it would be allowing people to pick-up applications for the government’s Section 8 Housing Choice Voucher program, which helps low-income families find affordable housing options.

Anthony Rumble says he was first in line Wednesday afternoon, and spoke with 10 On Your Side’s Rico Bush on Thursday.

“I had a tough road but God keep me pushing. Keep me positive. I just hope the best for the first 750 that get out here and try to make a change,” he said.

Once the 750 applicants fill out the paperwork, they must mail it to the housing authority by June 10. A sign on the Salvation Army read “No More Section 8 Apps” late Thursday morning.

Nearby residents reported traffic problems to 10 On Your Side due to the long line.

One viewer sent in a photo, which shows officers directing traffic on Airline Boulevard.

According to Holley, close to 40 officers responded to the area Thursday morning. She said there was initially just one officer there, but more had to be called in because of the size of the crowd.

Holley says she received estimates that more than 1,000 people showed up to Wednesday’s event.

We know  that at some point soon, one of these affordable housing application events is going to break out into an uncontrollable example of spontaneous blackness, i.e. a riot.

It was always going to take dramatic examples to shake white people from their racial indifference: The Affirmatively Furthering Fair Housing (AFFH) scheme of weaponizing non-whites to destroy the equity in white people's homes represents the ultimate example that may provide the necessary spark.

Riots at affordable housing application events? Just another reminder of why freedom of association translates easily into the freedom to discriminate.