This Week's Scapecop—Attacked First By An African Madman, Then By "Louisville Activists" 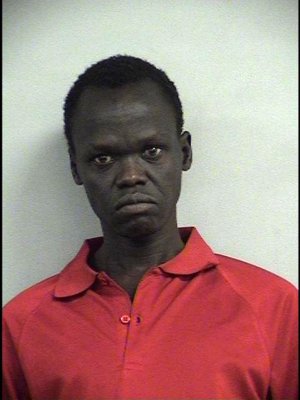 Police in Louisville, Kentucky, are taking heat for the fatal shooting of an African immigrant from Sudan, [Pictured right] who charged at an officer while swinging a metal flagpole just moments after he had allegedly assaulted a random woman on the street.

It was later learned that the Sundanese [sic] man did not speak any English.

He lived in one of the poorest sections of the city, “where people are just trying to get by,” a local resident who lives in the community, told WND.

Manyoun is a suspected refugee or asylum seeker from Sudan although neither police nor the local media had confirmed his immigration status as of Monday afternoon.

The U.S. State Department has imported thousands of refugees from war-torn Sudan since the 1990s.

What a great idea!

On Sunday, Louisville activists denounced what they called a national trend of police using excessive force against blacks. They questioned why Blanford didn’t first try to subdue Manyoun with a Taser, pepper spray or other non-lethal force.

Chanelle Helm, one of the organizers of the Stand Up Sundays activist meetings in Louisville — which have been held since August in response to the controversial police shooting of the black man Michael Brown in Ferguson, Missouri — said people concerned about the shooting of Manyoun should “flood police headquarters with their questions.”

How about flooding local offices of the "refugee resettlement contractor" rackets with a few questions?  (The contractors for Kentucky are listed on page 14 of that link, which I found of course via the invaluable Refugee Resettlement Watch.)

Officer Blanford, 40, has been placed on administrative leave pending the outcome of the internal investigation by DeSpain’s unit.

Translation: "... pending his public stoning and crucifixion by the media."