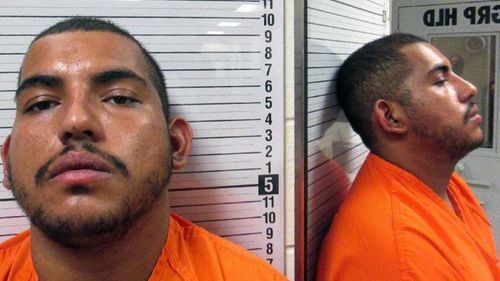 This Time, It's A LEGAL Mexican Immigrant Doing The Murders: Jesus Denali Killed Two Good Samaritans Because Their Daughter Laughed At Him

Whatever you do, don’t laugh at an immigrant after you've tried to help him out. You might get shot.

That’s what happened a Crow Indian couple and their daughter when they pulled over in Pryor, Mont., to help one Jesus Deniz, a legal immigrant facing a burglary charge. The parents are dead.

A court document reports that “Deniz told the interviewing agents that he shot the victims because he was getting tired of waiting around, and because the daughter laughed at him,” Fox reported.

The FBI and Bureau of Indian Affairs are handling the investigation because the murders occurred on an Indian reservation and the victims were members of the Crow tribe.

FBI agents say Deniz, a Mexican national and green card holder, “admitted to shooting three people with a .22-caliber rifle and then driving away from the scene in the victims’ vehicle.”

“Deniz told the interviewing agents that he shot the victims because he was getting tired of waiting around, and because the daughter laughed at him.”

The family came to help Deniz, who had run out of gas, after Tana Shane spotted him on her way home and went to her house just 50 yards away to get her husband and daughter, according to the Billings Gazette.

But when the trio approached the suspect, Deniz “pointed a gun at them, and told them to get out of their car,” and then demanded money, the complaint states. When the couple said they had only change because they recently returned from a religious revival in Window Rock, Ariz., Deniz told them to “start walking,” the complaint says. Jorah Shane told investigators she heard gunshots and her mother telling her in Crow to run.

As she ran, she “felt blood running down her face,” which was the result of a bullet wound, according to the document. [Man killed Montana good Samaritans because daughter 'laughed' at him, say cops, July 31, 2015]

The feds say they couldn’t deport him because he hadn’t been convicted.

Deniz, who was out on bond after being arrested last month for burglary in Wyoming, was nabbed 120 miles away near Meeteetse, Wyo., early Wednesday afternoon.  He was being held in Park County, Wyo., pending an appearance at 3 p.m. Friday in front of U.S. Magistrate Judge Carolyn Ostby in Billings.

A Department of Homeland Security official said Deniz was legally admitted into the U.S. on May 31, 2013. Immigration and Customs Enforcement officials were aware of the burglary charge, but cannot deport Deniz unless or until he is convicted of a crime.

“This individual does not have any criminal convictions, and, as a permanent resident, is not currently removable,” ICE said in a statement. “Thus, an ICE detainer cannot be placed on the individual at this time. However, ICE is closely monitoring this case and coordinating with local authorities. If he is convicted for a criminal offense that allows him to be removed from the country, after the completion of sentence, ICE intends to take him into custody and pursue his removal from the United States.”

In this case, we don’t have to ask what Jesus would do.