This Just In, San Francisco Not Completely Insane

In recent days it came to light that Mayor Gavin Newsom and his smug leftist cadre running city government have spent millions of dollars to protect illegal alien criminals from federal enforcement, in particular Honduran crack dealers claiming to be juveniles. Many residents of the sanctuary city by the Bay have become outraged at the events and regard the city's behavior as a shocking scandal.

As ultra-liberal as San Francisco may seem at times, elites coddling foreign criminals is over the line for most folks in the city, as shown by the local CBS affiiate's poll earlier this week: SF 'Sanctuary' Policy Questioned After Escape (Poll info is contained in July 1 video). Answering the question "Should San Francisco turn over convicted illegal immigrants for deportation?" 79 percent answered "Yes." 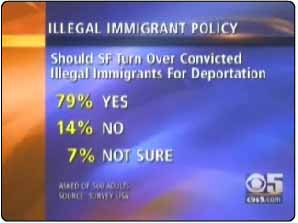 The media love to misclassify immigration enforcement as a far-right issue, although there is nothing more mainstream than support for borders and sovereignty. Polls consistently show that Americans across the political spectrum want immigration to be a legally controlled endeavor — even in San Francisco!