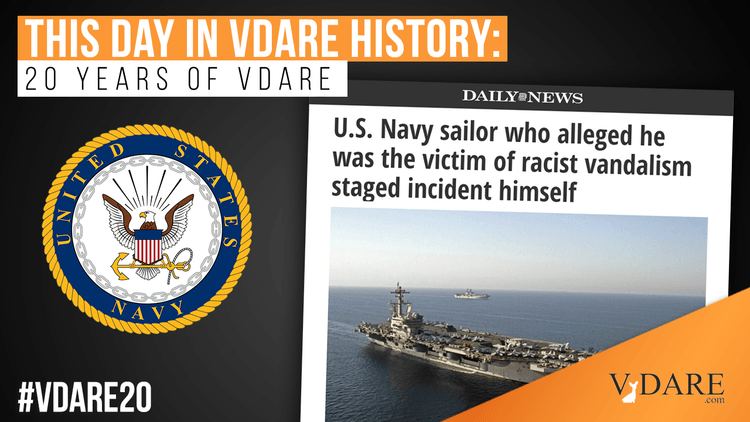 Originally published here on VDARE.com on this day in 2017.

Back when America was an evil racist, white country, servicemen were expected to take care of their living quarters and keep them clean. In the Current Year, servicemen destroy their own living quarters so they can get sympathy and attention on Facebook.

A sailor who claimed someone vandalized his living quarters in a racist attack aboard the USS George H.W. Bush (CVN 77) staged the incident himself, the Navy said Friday.

The sailor—whom the Navy did not name because he was not charged with a crime — shared photos of the alleged vandalism in a Facebook post that went viral.

“I proudly serve the Navy and this is what I’m receiving in return,” he wrote in the post. "#SailorAskingForHelp things are getting out of hand. Please share. Somebody knows something. (Thank you all for your guidance.”

He shared photos of the word “n——” scribbled across the walls above his bed.

[U.S. Navy sailor who alleged he was the victim of racist vandalism staged incident himself, by Megan Cerullo, New York Daily News, December 8, 2017]

No one could have predicted.

Needless to say, he was not charged with a crime, though he apparently received some kind of disciplinary action, as well as "counseling and training." (In what?)

However, "He will remain a member of the crew of the USS George H.W. Bush and will continue to perform his military duties."

In the civilian world, there's no surer way to rise to the top and secure titles and resources than to accuse your co-workers of racism (or sexual harassment.) Now, it looks like that code is coming to the military. God help us if the leftists start that war with Russia they want so badly.