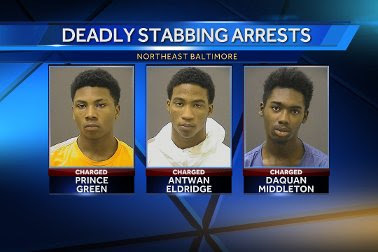 See also The Cost Of Freddie Gray: Not Just Once-Great Baltimore—But Drug Pushers’ Victims Throughout America. If interested, also check out this Podcast with Paul Kersey: A Gun Problem or a Race Problem? You'll enjoy both.

Imagine your final moments on earth going as follows: as a white male, you are riding your bike on a Saturday night in one of America's most violent cities (65 percent black Baltimore), only days before your 30th birthday, a group of black teenagers surround you.

You hop off your bicycle and pick it up, using it as a weapon to try and deter this group of black teenagers (no doubt enriched by the positives vibes flowing from the Freddie Gray Youth Empowerment Center) from attacking you.

Unfortunately, the group of black males is just too many (only three have been arrested so far, though MORE will be arrested for their part in the lynching of Robert Ponsi), and you're knocked to the ground, stabbed multiple times, and left for dead.

Your bike is stolen too.

Laying on the cold, hard cement, blood pouring from open wounds, gazing up at stars entirely indifferent to his situation, did Robert Ponsi muster the courage to admit the mistake he made in trying to live in a city where the director of the Baltimore Symphony Orchestra cheered on the black insurrection against what was left of the civilization white people built?

One can never know Robert's final thoughts, but we do know exactly what one of those black teenagers accused of his murder did after participating in his execution: he went home so his "neighborhood activist" mother could order him a pizza. [Neighborhood activist torn over son's alleged role in murder, Baltimore Sun, January 12, 2016]:

When she heard the news of another violent crime in her Waverly community, neighborhood activist Thomascine Greene said she would attend the victim's candlelight vigil and pray for his family.

Later that night, detectives came to her home and arrested her 15-year-old son for his alleged involvement in the murder.

Prince Greene is the third teenager charged as an adult with attacking Robert Ponsi as he bicycled home through Waverly Saturday night from his job as a server at a Harbor East restaurant.

"It's not hard for me to wrap my head around it, because he's a kid in the community," she said in an interview. "It's hard to wrap my heart around it."

Ponsi would have turned 30 on Tuesday.

Police wrote in charging documents that a group of teens surrounded Ponsi, who got off his bike, picked it up and began waving it in an attempt to fend them off. He was knocked to the ground, kicked and punched as the attackers yelled "Get his wallet!," witnesses told police. At some point, he was stabbed.

The first- and second-degree murder charges against Prince Greene followed the arrests Sunday of Antwan Eldridge, 17, and Daquan Middleton, 16. Both were charged as adults with murder, armed robbery and assault and were being held without bond.

Greene, 66, said she was stunned by her son's arrest. She said her son returned home Saturday before the 9:30 p.m. curfew she had set, and she ordered him a pizza.

Greene said she had no inkling at the time about the attack police now are connecting her son to.

She said she is keeping an open mind that he may be wrongly charged, "but I don't know to what degree."

Prince Greene is well known in area debate team circles as a standout member of the City College High School debate team. At age 12, he wrote a winning proposal for a small grant to fund a program for youth in his area.

"He showed a tremendous amount of leadership. He even had a business card," said Julie Reeder, executive director of Youth as Resources, which provided the grant. She said he talked to him about joining her youth board of directors.

As a sixth-grader at Loyola Blakefield, Greene acted on a local television show called "School Court." He played a lawyer and told The Sun at the time: "I want to be district attorney one day, so this is good practice."

Thomascine Greene, who has long been active in her community, said that she has long been demanding more resources for youth — as recently as last week's Waverly Improvement Association meeting.

"Every community meeting that we have, I'm talking about the youth," she said.

"With God as my witness, I said, 'You're going to wait until somebody gets killed, and have a community center in his name. Let's not wait.' We have to do something for these kids."

But Greene stressed she was not making excuses for a killing.

"I'm not saying because they don't have anything in the community, that's what you're supposed to do," she said.

Charging documents provide new insight into how police were led to Eldridge and Middleton.

As detectives investigated what happened to Ponsi Saturday night, patrol officers responded to a call for a stabbing five blocks away. There, police said they "encountered" Middleton, who had been stabbed in his right calf during the attack on Ponsi, according to the documents.

She said it took the tragedy of Freddie Gray's death for officials to pay attention to Sandtown-Winchester. "What does it take for the community to get funds for these young black males in Waverly?" she said.

But she reiterated that there was no excuse for hurting other people. "I really pray for the family," she said.

She was also dismayed by a torrent of racially-charged comments on social media after Baltimore police posted information about her son's arrest.

"We're in this thing together," she said. "We are one family, and we need to pull together."

The United States of America is irredeemable: The Baltimore Sun has published a story where one of the three (more black suspects will emerge) black suspects in the murder of a white male is basically painted as a victim, with his mother allowed to spout off nonsense of an impoverished community lacking resources as the reason black youth bludgeoned a white male to death.

If one article ever served as proof as to why Planned Parenthood should have offices on every corner of the Waverly and Sandtown-Winchester neighborhoods in Baltimore, this is it.

No, that's not going far enough.

Robert Ponsi, a white male, spent his final moments on earth using his bicycle as a defensive weapon to try and repel an attack by an undetermined number of black attackers. Three have been arrested, with one displaying sociopathic tendencies as he calmly went home less than an hour after Ponsi's execution to beat his curfew and enjoy a pizza.

Let that sink in for a second.

He used his recreational vehicle as a last-ditch effort to try and sustain his life on this planet.

His bicycle, which only moments before he was peacefully riding, became Ponsi's final hope for staying alive as multiple black people inched closer and closer to him. Literally, this scene could have come from an over-the-top racial paranoia fantasy about white colonization of Africa and black tribesman attacking the lone white soldier with spears, but it actually happened in 2016 Baltimore, Maryland.

Three black males, 17, 16 and 15-year old respectively, have been arrested for their part in the lynching/murder/execution of a white male in the 65 percent black city of Baltimore.

It's obvious the Freddie Gray Youth Empowerment Center is doing its job...