Thilo Sarrazin, author of the 2010 megaselling book Germany Abolishes Itself, has a new #1 bestseller in Germany, Wishful Thinking. Like all of Sarrazin’s books, it probably will never be translated into English. This article from DW.com suggests that Establishment response to Sarrazin has shifted from “too unthinkable” to “too obvious to think about.” 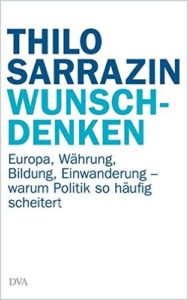 The enfant terrible of non-fiction German literature is back. Thilo Sarrazin’s latest book examines the “big mistakes” in current German and EU politics – but his provocative statements no longer surprise anyone.

The most recent tome written by divisive German author Thilo Sarrazin has hit the shelves this week, and critics have been quick to dismiss it. The book, titled “Wunschdenken” (Wishful Thinking), builds on the controversy surrounding his 2010 explosive work, “Deutschland schafft sich ab” (Germany does away with itself).

German newspaper “Bild” had a heyday over the publication, declaring “Sarrazin is at it again.” Others in the German press were more critical: The political magazine “Spiegel” accused the economist and former politician of being egocentric and spreading “cold aggression with a scientific veneer.” The daily “Süddeutsche Zeitung” degraded his work to a mix of “cute, terrible and good.”

Sarrazin is apparently settling a number of accounts in his new book: The 71-year-old author seems to have created a 400-page-long list of reasons why Germany’s government is failing to address key issues. Sarrazin alleges that “Germany’s future is highly contingent upon hot topics like immigration, demographic changes and education – but not equality, gender politics or any debate on climate change.”

His conclusion: Germany has started to waste away its affluence and level of education as well as its cultural heritage. And who is to blame? Sarrazin accuses unequivocally Chancellor Angela Merkel as the main perpetrator behind all the ailments he observes.

Sarrazin believes that Merkel’s approach to the refugee crisis was a fundamentally wrong move. He goes as far as referring to Merkel’s “crude refugee and immigration policy” as the “biggest mistake in German politics since the end of World War II.” Sarrazin also accuses Merkel of putting the nation as well as the European Union under increased risk.

He seems to take particular issue with the increasing number of Muslim migrants arriving in Germany. Sarrazin looks at these developments as an experiment that is bound to fail. He postulates that the majority of asylum seekers arrived from the Middle East and Africa with a low standard of education.

“Their cultural and cognitive profiles are similar to those of the Muslims who already are in Europe. Therefore, it is to be expected that their development in terms of education, integration into the work force, dependency on government assistance, criminality and susceptibility to fundamentalism will follow similar patterns as those who are already here,” he writes.

Sarrazin’s outlook is a gloomy one, accompanied by dystopian statistics: If one million refugees continued to come to Germany each year (as they did in 2015), their numbers would skyrocket to 134 million people by 2050 – his figures include family reunions and offspring.

The author admits that this is an unlikely scenario, but insists that such numbers exemplify how easy it would be to apparently lose control over Germany’s immigration issues. “Gaining back full control over our borders (…) will become an existential issue for our culture and the survival of our society,” he writes.

When Sarrazin first published his theories in 2010, his party, the Social Democratic Party of Germany (SPD), investigated whether he should be expelled because of his views, but it was decided that he could remain a member of the center-left party. Although he does not discuss the case directly in his latest book, he does express animosity towards established political values.

“If, as a German politician, you believe that everyone in the world should have the same rights according to Germany’s Basic Law and should be allowed to expect the same services from the welfare state as soon as they cross the German border, your immigration and refugee policies will be different than those of a politician, who truly chooses to work for the best interest of the German population.” Sarrazin fails, however, to specify who may or may not be included in his interpretation of the term “German population.”

… Six years ago, Thilo Sarrazin inflamed the country with his first publication on his views on immigration, “Deutschland schafft sich ab” (Germany does away with itself), where he specifically targeted migrants from Muslim countries. Two other books followed in 2012 and 2014. The once so media-savvy Thilo Sarrazin is now beyond his peak: His views on immigration policies are so well known that this book will fail to attract as much attention.

Sarrazin should have given his new book the title suggested by Kingsley Amis to Robert Conquest for a second edition of Conquest’s history of Communism.
[Comment at Unz.com]