78% of Gunshots in Washington DC Never Reported to the Cops 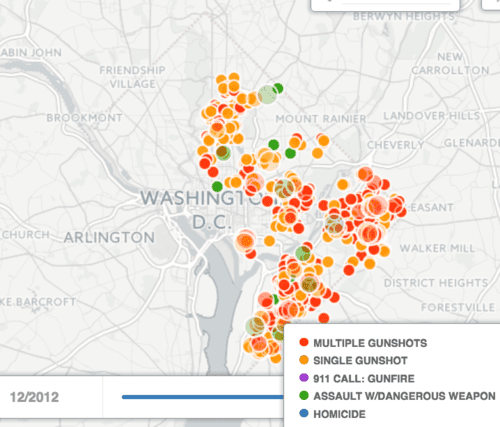 If you are in D.C. on New Year’s Eve, don’t go east of Rock Creek without a steel helmet

From the Brookings Institute:

… In a new working paper, Jillian Carr and I use data from a technology called ShotSpotter to present new evidence on the underreporting of gun violence. ShotSpotter uses audio sensors to detect and triangulate the location of gunfire incidents. Because it doesn’t depend on victims, witnesses, or police to report shots fired, it provides a more complete and accurate picture of gun violence in communities across the country than do other crime data sources.

We combine ShotSpotter data from Washington, D.C., and Oakland, CA, with the next-best data available on gun violence from those cities: reported crime data and 911 calls. Using individual gunfire incidents as initial events, we estimate the likelihood that each incident results in a 911 call or crime report.

Few gunfire incidents in Washington D.C. and Oakland result in a 911 call

It turns out that the reporting of gunfire incidents is extremely low. Based on data from January 2011 through June 2013 in D.C., only 22 percent of gunfire results in a 911 call, which could include calls for an ambulance.

The map of Washington D.C. above shows all the gunshots recorded by ShotSpotter on 12/31/2012. The red and orange dots indicate gunshots that weren’t called into 9/11.

Obviously, New Year’s Eve knuckleheadedness (firing guns into the air as well as heavy drinking) contributes to this particular map.

It would be interesting to know for year-round what fraction of unreported gunshots are due to:

3. Celebratory firing into the air

5. Attempted murder that the intended victim doesn’t want to report for affection for shooter (e.g., wife tries to shoot husband she catches in flagrante)

6. Attempted murder that the intended victim doesn’t want to report for fear of the shooter

7. Attempted murder that the intended victim doesn’t want to report for fear of arrest for whatever it is that inspired the shooter

8. Shootings intended to intimidate (e.g., a drive-by shooting where an enemy’s windows are shot out with little attempt to hit anybody inside).

… there were few mysteries among Southeast cases. The homicides were essentially public events—showy demonstrations of power meant to control and intimidate people. They took place on public streets, in daylight, often in front of lots of people. Killers often bragged.