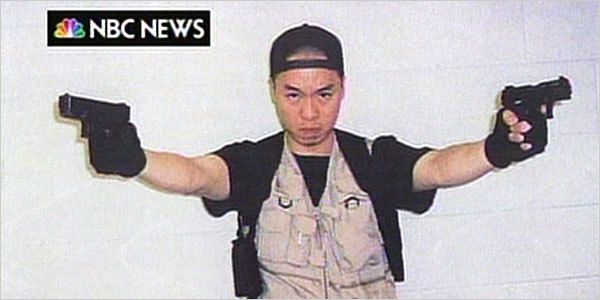 "These Students Were Not Killed By A Korean..."

Well, I'm glad that's cleared up. They were actually killed by ...guns. And American fundamental rights.

So let's just disregard all the hoopla about the race of the student responsible for the slayings. These students were not killed by a Korean, they were killed by a 9 mm handgun and a .22-caliber handgun.Plate: Let's lay down our right to bear arms - CNN.com

Earlier in the article, Plate had written "Ban Ki-moon is also Korean! Our brilliant new United Nations secretary general has not only never fired a gun..." (but had a engineered some kind of bogus peace plan for Sudan, blah blah blah.)

I don't see how a guy who spends as much time writing about Asia as Plate does could avoid knowing that all Koreans are required by law to do military service.

That being the case, I'd like to see some evidence that Ban-Ki Moon has never fired a gun.

It's true that South Korea has gun control as well as universal conscription. That may have been a factor in the one of the worst mass killings in history, the 57 people killed by Woo Bum Kon, a South Korean policeman who had taken guns from a police armory.

As for "all the hoopla about the race" and more important, the immigrant status, of Cho Seung Hui, there hasn't been any, except for a few people like us and Pat Buchanan. It's not allowed, remember?