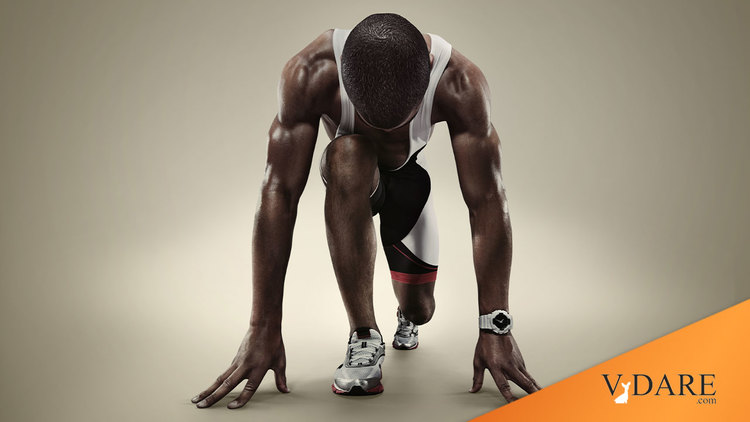 The World's Fastest Man—Round One

As I've often mentioned, the most remarkable streak in sports is in the Olympic men's 100 meter dash. The 100m competition typically starts off with about 80 entrants from around the world. After the first round, the top 40 move on to the quarterfinals, then 16 to the semifinals, and ultimately 8 to the finals.

Over the last six Olympics, 1984 through 2004, all 48 finalists have been men of West African descent.

Of the 40 survivors of the 2008 first round, there appear to be 3 East Asians (two from Japan and one from China), six Europeans (Poland, Italy Britain, Slovenia, Spain, and Russia), one or two mulattoes (e.g., Brazil), and around 30 blacks of West African descent, including the representative of Norway.

The Japanese can be pretty fast, as baseball player Ichiro Suzuki shows. Japanese runners made up 3 of the 32 semifinalists in the 1996-2000 Olympics.

Judging by the first round times, I'm assuming this streak will continue for a seventh Olympiad.

If I had to guess the man to break this string, it would be 21-year-old 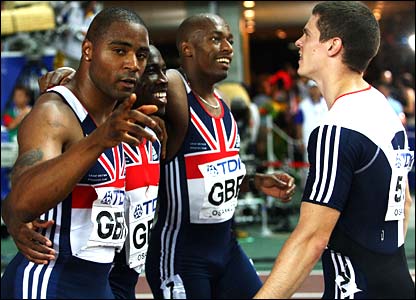 Craig Pickering of Milton Keynes, England. The British beat the Americans to win the gold in the 4x100 meter sprint relay in Athens in 2004, showing that they are a legitimate sprinting power, so Pickering even making the British team for the Olympics is impressive. In the first heat, Pickering ran a solid 10.21 to finish third just behind two West Indian stars, former world record holder Asafa Powell and two-time Olympic finalist Kim Collins. That made him the fastest nonblack in the world on Friday. (To be precise about this, you should adjust for wind velocity, which I haven't done.)

But Pickering's year probably won't be 2008. His goal now is to make the semifinals. He'll likely be more of a threat when he's at his 25-year-old peak at the 2012 Games in front of the hometown crowd in London.

Of the 364 times that human beings have run under 10.00 seconds, only once was by somebody not of largely or completely West African descent — Patrick Johnson of Australia, who is half Irish, half Australian Aborigine. (A Pole and a Japanese have run ten flat.)

"And I don't believe black sprinters think that just because of their colour they're automatically going to run under 10 seconds without working hard. But I don't like these questions because I'm scared of saying something that might offend black people - or even white people." ...

The prospect of both Pickering and Aikines-Aryeetey improving markedly between now and the London Olympics needs to be considered in light of Colin Jackson's recent assertion that it would take a miracle for a British athlete to win gold on the track in 2012. "I actually endorse that," Pickering says, while acknowledging that Jackson's formidable record as a world champion hurdler was also forged under Arnold's coaching. "If you look at the current state of British athletics, it is going to need a small miracle. America can produce 10 great new athletes a year. Nine of them might go to American football but the 10th will probably still beat most European athletes. The Americans won't be quaking that I've run 60m in 6.55. Next year in the indoor world championships they'll probably have three athletes running under 6.50 - so in that sense we might need a miracle."

And yet Pickering's strong displays this year are striking especially because, as he points out, "60m is not my best distance. I'm much more suited to the 100m and I'll be 25 in 2012 - which is the perfect age for a sprinter. So who knows?"