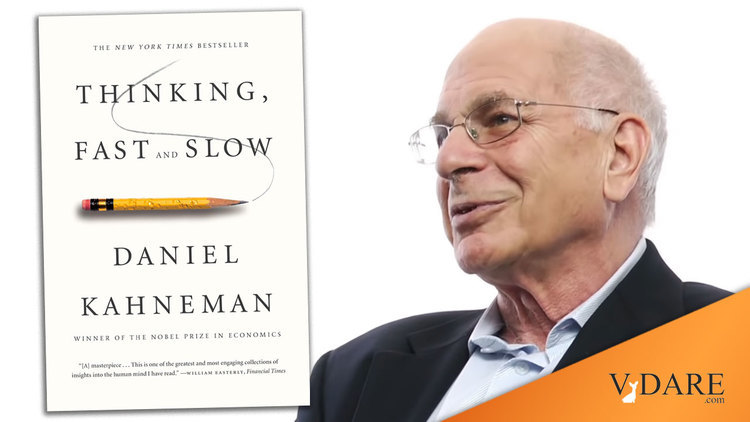 The War On "Stereotyping"

Here's a question from the sidebar, The Quiz Daniel Kahneman Wants You to Fail, to Michael Lewis's review in Vanity Fair of Nobel-winning psychologist Daniel Kahneman's Thinking, Fast and Slow:

2. A team of psychologists performed personality tests on 100 professionals, of which 30 were engineers and 70 were lawyers. Brief descriptions were written for each subject. The following is a sample of one of the resulting descriptions:

Jack is a 45-year-old man. He is married and has four children. He is generally conservative, careful, and ambitious. He shows no interest in political and social issues and spends most of his free time on his many hobbies, which include home carpentry, sailing, and mathematics.

What is the probability that Jack is one of the 30 engineers?

Here's the explanation given:

If you answered anything but A (the correct response being precisely 30 percent), you have fallen victim to the representativeness heuristic again, despite having just read about it. When Kahneman and Tversky performed this experiment, they found that a large percentage of participants overestimated the likelihood that Jack was an engineer, even though mathematically, there was only a 30-in-100 chance of that being true. This proclivity for attaching ourselves to rich details, especially ones that we believe are typical of a certain kind of person (i.e., all engineers must spend every weekend doing math puzzles), is yet another shortcoming of the hyper-efficient System 1.

Let's add some more of those rich details:

Jack has a B.S. degree from Purdue. At work, Jack wears a short-sleeve button-front shirt with a pocket protector full of mechanical pencils, just like most of Jack's coworkers on his floor. Jack always wears a tie clasp to keep his necktie from getting smudged by the blueprints when he leans over a drafting table. Jack's favorite line from Shakespeare is, "The first thing we do, let's kill all the lawyers." In fact, that's the only line from Shakespeare he knows. Jack wanted to name his firstborn son Kirk Spock, but his wife wouldn't let him.

So the percentage chance of Jack being an engineer is still "precisely 30 percent"?

I think one of the most widely overlooked cognitive flaws in the media is assuming that ignorance is smart, that scientists have proven that not noticing human patterns shows you have a high IQ (not that there's any such thing as IQ!).

I imagine that this sidebar wasn't made up by Kahneman or Lewis, but by some intern at Vanity Fair.

But, let me explain the fundamental flaw in Kahneman's underlying reasoning on this topic, and why it can mislead Vanity Fair staffers into thinking it validates their Jihad Against Prejudice. From Lewis's article:

It didn’t take me long to figure out that, in a not so roundabout way, Kahneman and Tversky had made my baseball story [Moneyball] possible. In a collaboration that lasted 15 years and involved an extraordinary number of strange and inventive experiments, they had demonstrated how essentially irrational human beings can be. In 1983—to take just one of dozens of examples—they had created a brief description of an imaginary character they named “Linda.” “Linda is thirty-one years old, single, outspoken, and very bright,” they wrote. “She majored in philosophy. As a student, she was deeply concerned with issues of discrimination and social justice, and also participated in antinuclear demonstrations.”

Then they went around asking people the same question:

Which alternative is more probable?

The vast majority—roughly 85 percent—of the people they asked opted for No. 2, even though No. 2 is logically impossible. (If No. 2 is true, so is No. 1.) The human mind is so wedded to stereotypes and so distracted by vivid descriptions that it will seize upon them, even when they defy logic, rather than upon truly relevant facts. Kahneman and Tversky called this logical error the “conjunction fallacy.”

Of course, Jack and Linda don't, actually, exist. They were made up by K&T. Now, most people don't read about other people in the context of psychology experiments where the professors are attempting to pull the wool over their eyes. They read about other people in novels, journalism, history and so forth where writers try to select details to communicate larger, more interesting points.