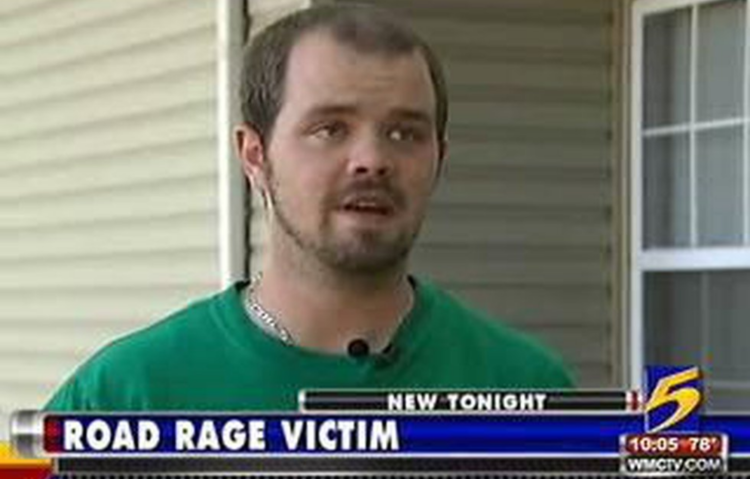 There's no description of Karlton Bradley, accused of chasing a white Memphis man several blocks before shooting him several times with what must have been a small-caliber pistol. But when they flash a picture of him on the screen, he turns out to be African-American.

Prediction—race won't be mentioned in this case until his defense lawyer tries to use it as an excuse, saying that the shooting was his response to the historic racism of Memphis.

"I was shot in my arm. The bullet grazed my right arm."

The wounds in Joel's arm and back and the bullet still lodged in his rib are a result of road rage.

He was driving down Sam Cooper Boulevard Tuesday afternoon, when another driver tried to pull into his lane but couldn't. "I saw him swerve over and almost hit the person next to him." says Joel, who doesn't want his last name revealed.

At Sam Cooper and Parkway, the other male driver, who police now identify as 39 year old Karlton Bradley, was angry.

"He pulled up beside me at the light cursing and yelling asking why I almost made him wreck. I said I ain't got time for this." says Joel.

Then at Poplar and Parkway things got worse, Bradley got out of his car.

Joel then drove off turning down several streets.

But at Eastmoreland and Camilla, the car chase ended and the gunshots started.

"I turned the wheel and started trying going around. That's when shots were fired in my passenger rear back window." says Joel. Joel was shot 3 times, but was able to drive himself to the Med.

Drivers say road rage isn't surprising, but the shooting is.

"The anger level of folk is way too high right now. People get mad at the drop of a hat." says Art Klemme of Raleigh.

"That would be outrageous. I couldn't imagine having a gun on him to do that." says Norri Bonner of Hickory Hill.

Joel says even more amazing, a woman and child were in the car with Bradley.

"They might have the mind frame, well if its ok for my dad to shoot somebody, so when I get of age to get a pistol I can shoot somebody." says Bradley.

Meanwhile, Joel says he will be a little more cautious about his driving, because you never know what the driver next to you might do.