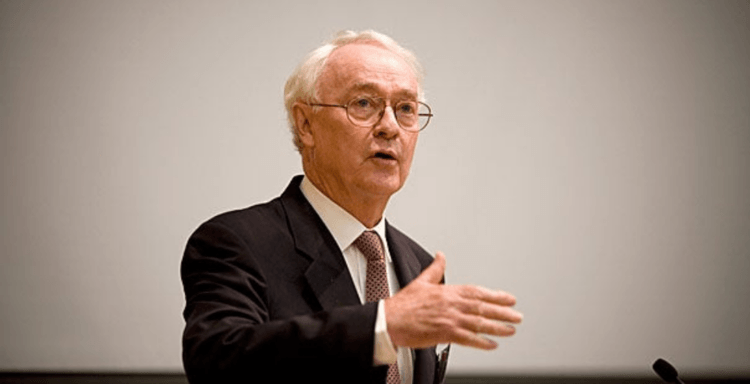 Much to Answer For: James Q. Wilson’s Legacy

His most significant legacy, however, lies in the impact of his scholarship and journalism on the contemporary structures of social control in the United States. His 1975 book Thinking About Crime

provides academic justification for a massive increase in imprisonment in the United States that began in the late 1970s and has yet fully to run its course. (The United States incarcerates at five times the rate of Britain, the leading jailer in Europe.) It is therefore entirely fitting—indeed, imperative—that there be extensive, critical public discussion about the intellectual impact of this towering figure of the study of American government.

While I came to disagree sharply with him on criminal justice policy, I must acknowledge that I liked Jim Wilson, the man. He was urbane, witty, and generous with his time. He was unfailingly open to hearing both sides of any argument. I knew him to be loyal to a fault, even-tempered, and often a wise observer of American politics. I admired his modesty and his prodigious work ethic. Indeed, my appreciation of “Gentleman Jim” dates back nearly three decades, to 1983, when he came to my humble Afro-American Studies office at Harvard, practically hat in hand, with a draft chapter on “race and crime” for an as-yet-unpublished book, Crime and Human Nature. He was writing it with Richard Herrnstein, who would go on to write The Bell Curve (1994) with Charles Murray. Wilson asked for my unsparing critique, which I provided. It impressed me that, when the book appeared two years later, he and Herrnstein had taken my criticisms seriously.

... That last association ended for me in 1995, when I publicly resigned my position after AEI fellows wrote two incendiary and what seemed to me borderline racist books—The Bell Curve and The End of Racism (1995), by Dinesh D’Souza. In those years, and partly in response to those two books, I began my long march out of the right wing of American intellectual life. And, in so doing, I slowly came to the view—which I continue to hold—that some of Wilson’s labors have done enormous damage to the quality of American democracy. His rationalizing and legitimating of over-reliance on incarceration in U.S. social policy have been particularly destructive. It frustrates me that even as mounting evidence over the past decade showed that crime control had become too punitive, Wilson stubbornly reiterated the views that he had developed four decades ago.

... Considered from today’s perspective, much of what the nascent neoconservative thinkers had to say was pretty appalling. Banfield’s classic lament of the failures of 1960s urban policy, The Unheavenly City, looks an awful lot like reactionary drivel. (His argument that persistent poverty is due to the bad values and character of the poor—first set out in his book about Italy, The Moral Basis of a Backward Society—might have made sense for Sicily, but did not travel well to the South Bronx.) And in retrospect Moynihan—whose work Wilson often extolled—hardly comes off looking like a great thinker. Calling a spade a spade turns out not to be a social policy.

In my long march out of the right wing, I came to believe that Wilson’s labors did enormous damage to American democracy.

Call me unforgiving, but I can still remember sitting at Jim and Roberta Wilson’s dinner table in Malibu, California in January 1993 listening to Murray explain, much to my consternation and with Jim’s silent acquiescence, that social inequality is inevitable because “dull” parents are simply less effective at child-rearing than “bright” ones. (I rejected then, and still do, Murray and Herrnstein’s claim that profound social disparities are due mainly to variation in innate individual traits that cannot be remedied via social policy.) Neither can Glenn Loury in 2012 ignore what he failed to see in 1983: that Wilson and Herrnstein’s Crime and Human Nature—a book that sets out to lay bare the underlying bio-genetic, somatic, and psychological determinants of individuals’ criminal behavior—is an enterprise of dubious scientific value. The behavioral theories of social control that Wilson spawned—see, for instance, his 1983 Atlantic Monthly piece, “Raising Kids” (not unlike training pets, as it happens)—and the pop–social psychology salesmanship of his and George Kelling’s so-called “theory” about broken windows is a long way from rocket science, or even good social science. This work looks more like narrative in the service of rationalizing and justifying hierarchy, subordination, coercion, and control. In short, it smacks of highbrow, reactionary journalism.

But, unlike most tabloid scribblers, Wilson’s writings had a massive effect. The broken windows argument—by cracking down on minor offenses, the police can prevent the perception of disorder that leads to more serious crimes—has influenced urban law enforcement strategists throughout the nation. Even so, as scholarly critics across the ideological spectrum have noted, there is little evidence beyond the anecdotal to show that such “quality of life” policing actually leads to lower crime rates. When I consider the impact of his ideas, I can’t help but think about the millions of folks being hassled even as we speak by coercive state agents who are acting on some Wilsonian theory recommending stop-and-frisk policing.

Neither can I overlook the reinforcement of subliminal racial stigmata associated with the institutions of confinement, surveillance, and patrol that Americans have embraced over the past two generations under the watchful and approving gaze of Professor Wilson.

I don’t think Jim Wilson had a racist bone in his body. Neither do I doubt his sincerity when he expressed regret, as he often did, that blacks are overrepresented among those being punished for having committed crimes. But intent is one thing; results are another. A politics of vengeance has abetted the unprecedented rise in U.S. incarceration rates since 1980. I am made keenly aware of the deleterious impact these policies have had on residents of urban black communities, law-abiders and law-breakers alike. This was not Wilson’s intent, but plainly it was one consequence of ideas that he championed. ...

But is his 1997 book The Moral Sense—which cites human nature to make a case against moral relativism, and which Wilson thought his most important publication—a work for the ages? I doubt it seriously. Is Thinking About Crime up there in the pantheon of American social criticism along with Silent Spring, The Other America, The Feminine Mystique, or The Fire Next Time? Not hardly.

James Q. Wilson was not the Thomas Hobbes of our time—though it is a good guess that he fancied himself grappling with a Leviathan. A cloistered moral sanctimony (“Tobacco shortens one’s life; cocaine debases it”) coupled with an enthusiasm for police work (“prison in America . . . helps explain why this country has a lower rate of burglary than Australia, Austria, Canada, England, Germany, and the Netherlands”): that’s another way to think about the legacy of James Q. Wilson. Unkind to be sure, but not inaccurate.

With all due respect to the influence of his writings on bureaucracy, policing, and social policy, I’m just not buying the hagiographies that appeared in the likes of the Wall Street Journal, Los Angeles Times, and Boston Globe after his passing. For my money, he died with an awful lot to answer for.

So, let's go back to the soft-on-crime policies of the 1960s and 1970s. Sure, a lot innocent people will be murdered and raped, but that's a small price to pay for purging racist crimethink.