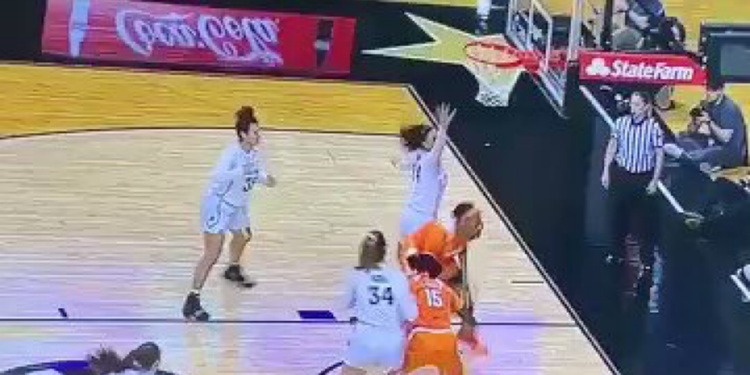 The Uncanny Valley of Women's Basketball

This is footage of two college women’s teams in the big time SEC playing.

Shaq suggested that lowering the rim to allow players to dunk could increase interest in the WNBA.

He gave the unsolicited advice to Candace Parker, a two-time WNBA MVP who can dunk on 10-foot hoops.

Shaq’s argument is flawed for many reasons, most notably because it’s demeaning to women’s players.

Women’s basketball is stuck in this Uncanny Valley. Because the game is so butch in terms of its physical and personality demands (Bill Simmons’ view is that the NBA playoffs exist to determine who is the NBA’s supreme alpha dog, such as Michael Jordan in the 1990s) it mostly appeals to lesbians. But even lesbians still look girlishly awkward and inadequate trying to play it.

I’ve long suggested that women’s basketball should be played with 8’6″ baskets and balls only slightly bigger and heavier than volleyballs.

The alternative to lowering the rims to allow women to dunk would be to feminize women’s basketball by making it more like Australian netball, a game that attracts pretty girls.

As far as I can tell, netball is more or less the British Empire equivalent of the old 6-girls on a side girls’ high school basketball game that feminists abolished in the 70s. I can recall reading an irate article in the 1970s about how in some US states, girls played basketball 6 on 6 according to rather different old rules that sexistly didn’t let girls show off their in-your-face domineering masculinity.

The feminists won that argument, and within a couple of decades, women’s basketball became a lesbian ghetto.