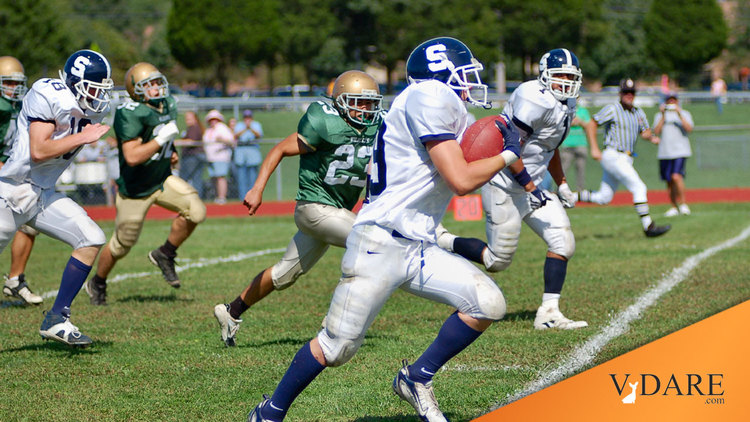 The Superstarification Of Everything: High School Football Edition

In case you are wondering, Southern California has long liked football more than you might think. Over the generations, lots of people, white and black, came to California from football-crazy places like Oklahoma, East Texas, and northern Louisiana. On the other hand, recent immigrants either aren’t that crazy about football (the Chinese) or aren’t that fast (the Mexicans).

… The two Catholic schools, rivals in the Trinity League, have split the last four state championships in California’s top division, and each has won two mythical national titles in the previous eight seasons. But this rivalry stands out for another reason: St. John Bosco and Mater Dei are locked in an arms race to garner the best high school players from one of the country’s most fertile talent pools. The quaint ideal of suiting up for a neighborhood school has given way as some players make hourslong commutes to further their football ambitions. St. John Bosco is in Bellflower, which is southeast of South-Central L.A. It’s not a high rent district: Bellflower was majority Hispanic in 2010, with substantial percentages of whites, blacks, and Asians. Tuition is $15,500 per year, compared to say, $20k at Notre Dame of Sherman Oaks or $43,000 at Harvard-Westlake in the Hollywood Hills.

But, still, $15,500 isn’t cheap. The kind of white Catholic families that can afford $15,500 have moved much further out into Orange and Riverside Counties. Current enrollment is 38% Hispanic, 31% white, 14% Asian, and 9% black. But the alumni of this all-male school tend to be loyal, generous, and like football:

A little more than a decade ago, St. John Bosco was at a crossroads. Enrollment, which had peaked in 2001, had plummeted by one-third to fewer than 700 in the wake of the Great Recession. “We were on the ropes,” said Paul Escala, who was hired as St. John Bosco’s president in 2010 and is now the superintendent of schools for the Archdiocese of Los Angeles. The school decided football could be its salvation.

St. John Bosco is very near the biggest remaining black population in SoCal, and not far from the Polynesians who cluster near Long Beach. I count 15 Polynesian names on this year’s roster, although the most intimidating name belongs to a 311-pound sophomore: King Large.

Mater Dei is in Santa Ana, the heart of the Mexican part of northern Orange County, and not far from Asian places like Irvine in southern Orange County. I’ve seen St. Genevieve HS in the San Fernando Valley put together a winning football program using local middle-class Filipino and Mexican boys, but they, wisely, play small-time schools.

So it doesn’t have all that promising of a neighborhood talent base, although it’s not too much further from the Samoan parts of the Harbor area than is St. John Bosco. I count 17 Polynesian names on the team.

I saw Mater Dei’s weight room in 2011 and it looked like my idea of what USC’s weight room would look like — and this article says that was before Mater Dei realized they needed to raise a whole lot more money for their football team to compete with St. John Bosco.

, nationally televised games against out-of-state opponents, productive fund-raising and nonexistent attendance boundaries — are so attractive to recruits because when Mater Dei and St. John Bosco play, pretty much anyone who steps on the field will one day become a college football player.

The schools have sent 130 players to Division I colleges over the last five years, according to MaxPreps, a website that covers high school sports, and more than 60 players on this year’s teams have offers to play in college — from Army to Alabama. Neither team has lost to another California school since 2015.

At the start of the season, the quarterbacks on the top two college teams this year, Georgia and Alabama, were both Mater Dei grads (although JT Daniels at Georgia has since been hurt). Mater Dei has been Quarterback High for roughly ever: due to the dry weather, which makes passing the football less risky, California got a jump on the rest of the country in nurturing passing quarterbacks a couple of generations ago. It’s not that SoCal quarterbacks were ultimately better in the NFL — USC and UCLA QBs have tended to be nothing special in the NFL (Western Pennsylvania, home to Dan Marino, Joe Montana, Joe Namath, Jim Kelly, and Johnny Unitas, has been the cradle of quarterbacks), but that you could count on a Mater Dei QB to be ready to play big-time college football respectably.

The concentration of talent in two Catholic schools 24 miles apart mirrors what has happened in college football, where name-brand powers are no longer content to recruit in their backyards — and where the talent gap between a handful of perennial playoff teams and everyone else is becoming a chasm.

Total number of high school football players fell about 10% over the decade before Covid, and you now see things you didn’t previously see, like a losing team forfeiting its last couple of games because not enough players show up. Football is still a huge deal in American high schools, but the long run trend seems to be that it will increasingly become gladiatorial, with fewer regular kids and a higher percentage of youths with dreams of the NFL.

According to the database of the recruiting site 247Sports, more than half the nation’s five-star recruits in the last five years (82 of 163) have signed with four colleges: Alabama, Ohio State, Georgia and Clemson.

“What you’re seeing in Southern California is the exact same thing,” said Jason Negro, the coach at St. John Bosco. …

Negro’s model mirrored that of a college program. He ramped up fund-raising, established passing league programs (60 percent of the Braves roster are alumni) and “jumped two feet in” establishing a talent pipeline from youth tackle football programs.

Youth tackle football programs (i.e., before puberty) tend to be rather hardcore. The urge to knock guys down is less pervasive before high school than during high school. The old high school football model is that we’ll take a bunch of 14- year-olds who suddenly want to tackle people and teach them how to play football by yelling at them. The new high school model is that we’ll recruit the superstars who have been playing tackle since they were eight.

Now the Braves play most of their nonleague schedule against teams from outside California. They have traveled to Hawaii, Ohio, New Jersey, Florida and Washington, D.C., in recent years, and this season visited Chesapeake, Va., where they throttled Oscar Smith High School, the top-ranked team in the state, 49-0.

As St. John Bosco began its ascent, Bruce Rollinson, the coach at Mater Dei, feared becoming a dinosaur. Now 72, Rollinson is a gravel-voiced, sharp-tongued throwback. He still requires his players to arrive at the start of training camp with a buzz cut — or their teammates will do the shearing for them. On game days, players wear dress shirts and ties to school.

In 2011, Mater Dei missed the playoffs for the only time in Rollinson’s 33 years as the head coach. Though quarterbacks still showed up at the school every summer — John Huarte and Matt Leinart would go on to win Heisman Trophies in college — burly linemen and tackle-busting running backs no longer did.

“Burly linemen” is code for Samoans and other Polynesians and “tackle-busting running backs” means blacks.

It’s easier to explain things if you spell out what you are talking about, but this otherwise good article is an example of why the New York Times is still highly informative to well-informed readers.