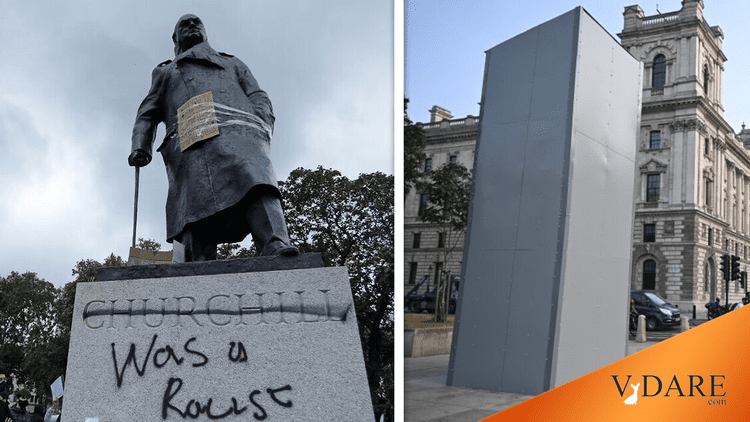 The Statue of the Future: Churchill In A Box

The statue of the future https://t.co/76knwZS94W

Is this a picture of the new 2001ish box around Churchill’s statue or the Cenotaph, Edward Luyten’s revered memorial for the dead of World War I?

London mayor Sadiq Khan boards up monuments to protect them from protesters – as BLM cancels rally over ‘threats from many hate groups’
Scaffolding sprung up around Churchill’s statue at Parliament Square and nearby Cenotaph late on Thursday
The monument of Britain’s war-time leader was covered in graffiti saying ‘Churchill was a racist’ last weekend
It comes amid fears of a clash between Black Lives Matters activists and far-right thugs in the capital city
The covering of British historical monuments prompted outrage from a number of Tory MPs last night
The protests has ignited a discussion about Britain’s imperial past and figures associated with slavery
Guy’s and St Thomas’ Hospitals revealed statue of Thomas Guy would be removed following public pressure
By JOE MIDDLETON and JEMMA CARR and MARTIN ROBINSON, CHIEF REPORTER FOR MAILONLINE

In the background is Churchill’s senior partner in the great Liberal government of roughly 1906-1919, David Lloyd-George, victor in the Great War.

In other news, perhaps the greatest high point of the sitcom art, the “Don’t Mention the War” episode of John Cleese’s Fawlty Towers has been canceled from the BBC streaming service. The early part of the episode is less funny than most Fawlty Towers episodes, but it builds to a peerless climax: “You started it. You invaded Poland!”

The BBC Comedy Script Editor who rejected the pilot screenplay for Fawlty Towers in 1974 wasn’t behind the times, he was 46 years in advance of his times.