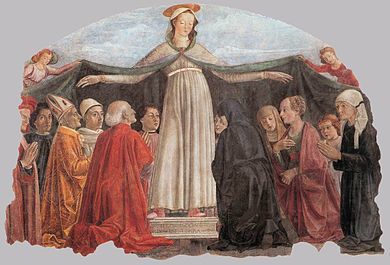 The Spaniards and the Moors—Past and Present

Looking at my trusty copy of Father Lasance's New Roman Missal (which, name notwithstanding, is a missal for the traditional Latin Mass), I noticed that in the Catholic Church's traditional calendar, today is the feast of Our Lady of Ransom. Here is what the Missal has to say:

SEPT 24. Our Lady of Ransom: The Order of Our Lady of Ransom was founded in the Thirteenth Century by St. Peter Nolasco and St. Raymond of Pennafort, aided by King James of Aragon. The object of the Order was to redeem Christians held in slavery by the Mohammedans. Pope Gregory IX instituted the feast of Our Lady of Ransom and afterwards it was extended by Pope Innocent XII to the Universal Church .

Soeren Kern, writing from Spain for The Brussels Journal, reports that Our Lady of Ransom ( Virgen de la Merced to Spaniards) is Barcelona 's patron saint. Accordingly, her feast will be celebrated in Barcelona , and on a large scale. Kern says "some 600 cultural events have been scheduled from September 19 to September 28." But he also notes that, in keeping with Socialist Spain's unenviable position in the vanguard of today's anti-Christian Europe , "not a single one of them will make any explicit reference to the religious origin of the event."

Indeed, times have changed. Far from being the Catholic Spaniards who, in a Reconquista taking almost 800 years, won their country back from the Moorish invaders who had despoiled and inflicted Islam on it, today's Spaniards (Catalans, here) are doing everything they can to grovel to the Mohammedans they have so unwisely allowed to enter Spain again. Kern reports that not only have celebrations of Islam been inserted into this Christian feast that once celebrated liberation from Islamic slavery, Spanish officials are warned not to practice their Christian faith, if so inclined, but to be sure to affirm Islam:

"Fast-forward some eight centuries to September 2008. Multiculturalism has (temporarily) replaced Islam as the dominant religion in Spain . And multiculturalism's core doctrine of political correctness says it is now forbidden to honor the memory of faithful Roman Catholics who languished under Muslim captivity.

Instead, the Islamic community of Barcelona has been officially invited to hold its very own festivities as part of the La Mercè festival for the first time ever. Nits de Ramadà (Nights of Ramadan) aims to allow Muslims to party with friends and family during the evening hours when Muslims stop fasting for Ramadan. Nits de Ramadà is open to non-Muslims, provided they dress properly, do not have more than four wives, and do not smuggle alcoholic beverages into the fairgrounds.

At the same time, an anti-clerical group called Lliga per la Laïcitat (Secularism League), which receives a 30.000 euro subsidy to “advise” the regional Catalan government on the separation of church and state, has sent a letter to every municipal councilor in Barcelona warning them not to participate “in the religious celebration that takes place during the festival.” The “religious celebration” refers not to Nits de Ramadà, but rather to a Catholic mass that is scheduled for September 24.

The letter says that justifying attendance of the mass "on the basis of an institutional commitment or a tradition contradicts the imperative necessity to understand that individual religious conscience—which in this case it is— should never take priority in determining the decisions arising from the office an elected representative is temporarily exercising."

Just in case that was not sufficiently clear, the letter closes by saying: "Democratically elected representatives must exercise their civic role separate from their membership of one or other belief system. In the most friendly and respectful manner possible, we must remind you that you are also representatives of the City of Barcelona ."

In the post-modern linguistics of Spanish Socialism, the letter is saying that any elected official in Barcelona should think twice about his or her job security before attending the Catholic mass that is being held in memory of the city's patron saint. By contrast, attending Nits de Ramada is not only encouraged, but essential to career enhancement."

Kern also reports that among Spaniards this suicidal dhimmitude and hypocritical double-standard is not confined to Barcelona or Catalans:

"If the gatekeepers of Spanish multiculturalism do not see any irony in the Islam versus Catholicism debate in Barcelona , then neither does Spanish Prime Minister Jos?© Luis Rodr?­guez Zapatero see any irony in his recent trip to Turkey .

Zapatero, addressing some 2.500 guests at a Ramadan fast-breaking iftar meal in Istanbul on September 15, declared that Spain is a country "proud of the influence of Islam in its history." He went on to say: "We want to pay respect to all religions; we want to be tolerant of all faiths and ideologies. We will demolish all walls that are barriers to understanding each other."

Just moments earlier, Zapatero's host, Recep Tayyip Erdogan, the Islamist prime minister of Turkey , said: "We expect members of other civilizations to declare Islamophobia a crime against humanity." This is the same Erdogan who once said of Islam: "Mosques are our barracks, minarets our bayonets, domes our helmets, the believers our soldiers."

And so on it goes in today's Europe, where, shorn of any attachment to their traditional faith and civilization, the politicians entrusted with the peace and security of the old continent are Europe 's gravediggers. However dangerous the Moslem invaders, with their incessant demands and sectarian violence, are, they are not nearly as dangerous as enemies within such as Zapatero, ever eager to accommodate them at their own people's expense. What St. Peter Nolasco and St. Raymond of Pennafort, to say nothing of James I of Aragon , would think of traitors like Zapatero and the dhimmis of the Lliga per la Laïcitat is not hard to imagine.

Our Lady of Ransom, pray for us!