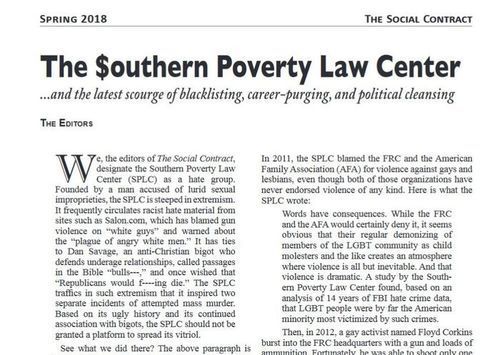 THE SOCIAL CONTRACT's Must-Read Report On The $PLC

The contents of the Spring 2018 issue of The Social Contract is devoted to the Southern Poverty Law Center (SPLC), a nonprofit organization that has come under increased scrutiny from members of congress, nonprofit consultants, and some MSM news outlets.

Considering the massive financial reserves of the SPLC’s endowment, which is approaching half a billion dollars, SPLC President and CEO Richard Cohen appeared before the U.S. House Committee on Homeland Security on November 30, 2017, and was asked about the organization’s $69 million in bank accounts in the Cayman Islands, British Virgin Islands, and Bermuda. Rep. Clay Higgins (R-LA) asked Cohen, “Since the SPLC is not subject to taxation, why would there be a need for the SPLC to have offshore accounts reported up to $69 million in areas like the Cayman Islands…. What would be the legitimate reason that the SPLC would have millions and millions of dollars in offshore accounts?” Replied Cohen, “I think there's been some confusion in the press about this. It's common for nonprofit organizations, including universities, big foundations to have money in offshore accounts. It avoids two things. First, it avoids a lot of certain kinds of filings, and it avoids unrelated business income tax.”

But according to Amy Sterling Casil, CEO of Pacific Human Capital, a California-based nonprofit consulting firm, “I’ve never known a U.S.-based nonprofit dealing in human rights or social services to have any foreign bank accounts.... I am stunned to learn of [SPLC’s] transfers of millions to offshore bank accounts. It’s a huge red flag and would have been completely unacceptable to any wealthy, responsible, experienced board member who was committed to a charitable mission I ever worked with. I know of no legitimate reason for any U.S.-based nonprofit to put money in overseas, unregulated bank accounts.” Southern Poverty Law Center Transfers Millions in Cash to Offshore Entities, By Joe Schoffstall, Washington Free Beacon, August 31, 2017. (This issue was first reported on VDARE.com by Patrick Cleburne in 2010.)

The timely TSC report is a must-read for concerned citizens and policy makers alike. In addition to the SPLC’s questionable financial holdings, it probes their blacklisting tactics and dubious methods for identifying “hate groups” and labeling prominent African-American conservatives, such as Ben Carson and Carol Swain, as “white supremacists” and “political extremists.”

The new report includes an exclusive interview with Laird Wilcox, renowned expert on political fringe groups and “watchdog” organizations, and primary source for the Wilcox Collection on Contemporary Political Movements at the Kenneth Spencer Research Library at the University of Kansas.

Printed copies should be available by mid-May. Visit the TSC website for this must-read special report.