The Simpsons Show Imagines a Sharia-Friendly Future in Michigan

On Sunday, the Simpsons show had an episode portraying a wacky future in which Bart is a layabout bum, Lisa is married to Milhouse with a snotty teenaged daughter and Maggie is an international rock star. For a brief moment, there was an offhand reference to Michigan being a sharia state, with Milhouse in a burqa. 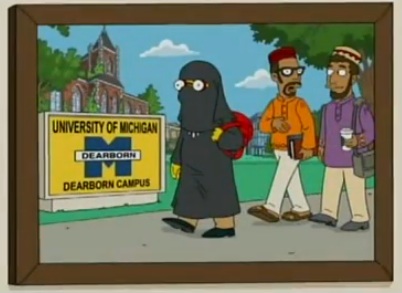 Naturally, the fifth columnists at the Council on American Islamic Relations (CAIR) jumped on the mention, trying to frame it to their advantage. A Twitter burp from CAIR proclaimed, ?Video: Simpsons Episode Mocks Anti-Sharia Hysteria?. That was hardly my impression, but check it out.