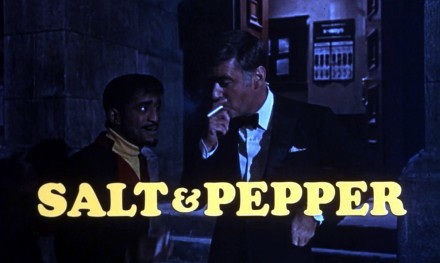 The “Salt and Pepper Crew” In The Washington Post

"Salt-and-Pepper team" is a somewhat dated slang term meaning one a team of either  criminals, or of police with one black and one white member. Back  in the  Sixties,  there was this movie, with Sammy Davis Jr. and Peter Lawford as Charlie Salt and Christopher Pepper.(Lawford is Pepper, Davis is Salt.) However, in the Washington Post story ‘Salt and Pepper’ pickpockets preyed on elderly shoppers [by Michael Laris, January 12, 2013] we see no indication anywhere in the article of why the Virginia police referred to John Sylvester Washington and Tamara Hope Frazier as the “Salt and Pepper Crew”.

The answer, obviously, is that Washington is black, and Frazier is white. This is an in-depth story, and if it's not up to the profile Gene Weingarten did about The Great Zucchini, it's certainly meant to be a piece of serious journalism, but it doesn't even mention the race of the perpetrators, although it's vital to your understanding of the story, since it's more or less how the detectives caught them.