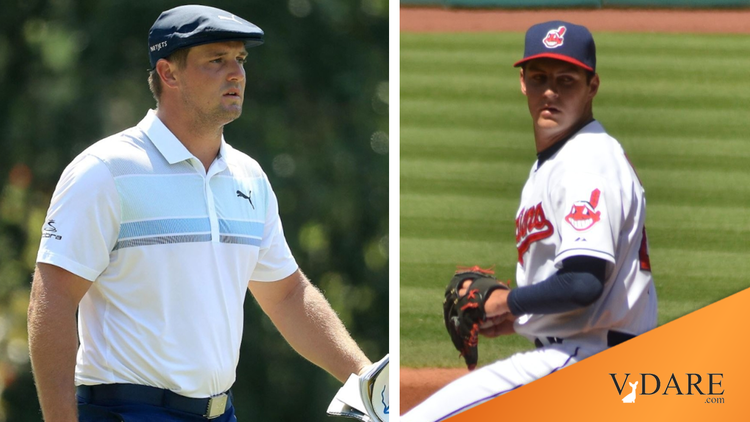 The Rise Of The Nerd Jocks: Trevor Bauer And Bryson DeChambeau

An interesting development is the emergence of ornery nerd athletes like baseball pitcher Trevor Bauer, the likely 2020 National League Cy Young Award winner this month, and Bryson DeChambeau, the favorite to win The Masters golf tournament this weekend.

I wrote about Bauer’s quest to add MPH to his fastball in 2019 in my review of The MVP Machine, a book about how baseball in the post-analytics era is imitating golf in looking for obscure innovations in technique:

Slow-moving golf is not thriving as a sport. It’s likely not good for baseball’s long-term health that it’s turning into team golf….

Although a large fraction of American ballplayers play golf for fun, the two sports are psychologically distinct. Pro golfers tend to be loners and tinkerers forever looking for an edge. They tend not to be team players. For example, the father of physics major-turned-golfer Bryson DeChambeau, golf’s equivalent to Bauer, recalled:

“Team sports didn’t work for Bryson. He simply couldn’t understand why his teammates didn’t give maximum effort at all times, like he did. It drove him crazy.”

Baseball, in contrast, is a team game, a sleepy summertime sport with an endlessly long schedule (a 162-game regular season in the big leagues) that isn’t conducive to obsessive practice.

Moreover, baseball players tend not to be bookish sorts. The key to hitting a 90-mile-per-hour pitch is sharp eyesight, which doesn’t correlate with a scholarly disposition. Coaches tended to be seen-it-all old-time players, although in the past few years, pioneering teams like the Houston Astros and the Dodgers have started to hire mad-scientist types from the ranks of obscure hitting and pitching instructors.

And baseball doesn’t have much room for guys who would drive their teammates crazy, like, say, Bauer.

This year, DeChambeau returned to the golf tour from the pandemic shutdown with 20 extra pounds of muscle. He’s now hitting the longest drives by far of any top player in golf history, averaging 344 yards per teeshot this year, winning the U.S. Open easily. And now he’s likely to turn venerable Augusta National into a drive and pitch course. For example, he claims that if the fairways dry out, he might be able to drive the green on the 445 yard first hole at Augusta.

The Masters is the most popular tournament because it caters to the big bombers: Jack Nicklaus has won six Green Jackets, Tiger Woods five, Arnold Palmer four, and Phil Mickelson and Sam Snead (among others) three each. Augusta National’s back nine par 5s, 13 and 15, are great for Sunday excitement because in trying to reach the green in two instead of three shots, the contenders can make an eagle 3 or put it in the water and make a bogey 6.

But DeChambeau threatens to turn 13 into a drive and wedge hole.

A West Texas Reader Says With Voting Machines, It's Not Who Votes, It's WHAT Counts The Votes
MORE...
POPULAR TAGS