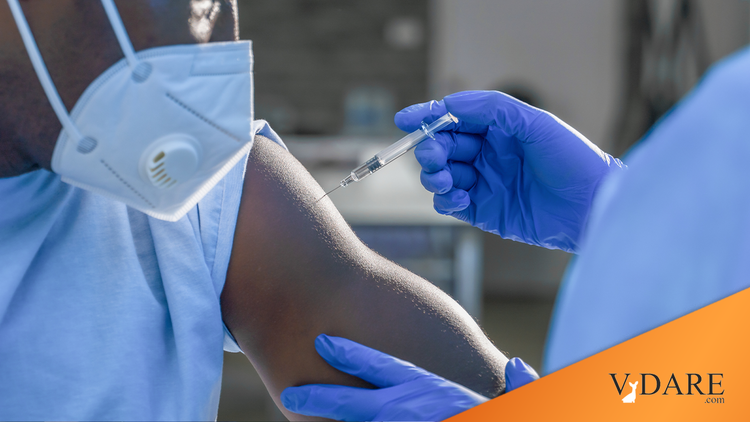 Should Blacks Get The Vaccine First?

Health experts want to prioritize people of color for a Covid-19 vaccine. But how should it be done?
By NICHOLAS ST. FLEUR @SciFleur NOVEMBER 9, 2020

As the U.S. edges closer to approving a vaccine for Covid-19, a difficult decision is emerging as a central issue: Should people in hard-hit communities of color receive priority access to it, and if so, how should that be done?

We know that the new Pfizer-BioNTech vaccine works very well at reducing susceptibility to coming down with Covid symptoms (over 90% reduction in the clinical trial so far), but we don’t know much yet about how much it reduces infectiousness. We have reasons to hope that it will also substantially decrease the likelihood that the vaccinated will infect others, but no numbers yet.

If it didn’t reduce infectiousness, then we’d have a simpler modeling problem of whom to prioritize, with only a few main inputs: how likely is somebody to get infected without the vaccine, how likely are they to die or suffer badly if they are infected, and how likely is the vaccine to reduce their susceptibility (with 90%+ effectiveness, it’s probably pretty likely to work not bad for most people, but we haven’t seen any data yet on how well it works for different demographics, such as the old).

If the vaccine also reduces infectiousness, then it would make sense to also prioritize people who are likely spreaders but unlikely to suffer much from it themselves: e.g., a 20-something who works part time at two different nursing homes and who lives in a large household including elderly people.

Frontline health workers, elderly people, and those with chronic conditions that make them especially vulnerable to Covid-19 are likely to be at the head of the line, but there is also support among public health experts for making special efforts to deliver the vaccine early on to Black, Latino, Native Hawaiian and Pacific Islander, and Native American people — who have experienced higher rates of serious illness and death from the coronavirus.

“Having a racial preference for a Covid-19 vaccine is not only ethically permissible, but I think it’s an ethical imperative,” said Lawrence Gostin, a professor of global health law at Georgetown University. “The reason is both because of historic structural racism that’s resulted in grossly unequal health outcomes for all kinds of diseases, and because Covid-19 has so disproportionately impacted the lives of people of color.”

There are concerns, however, about legal objections to any framework that uses race and ethnicity when determining vaccine allocation and the way it might be interpreted in court. For instance, judicial scrutiny would not allow health care workers to skip a white person in line for a vaccine in favor of a person of color, as Gostin wrote recently in the Journal of the American Medical Association. He also noted that legally, a public health agency could probably not distribute vaccines to geographic locations based solely on race.

“My worry is that if there was explicit racial priority given to the Covid-19 vaccine, we could be embroiled in litigation that would really undermine implementation of the vaccine process, and also be at great risk of being overturned by the Supreme Court, particularly with its new conservative majority,” Gostin told

There is also concern that some groups, especially Black people, might be hesitant to be among the first to get a vaccine, given the history of mistreatment of Black patients in medical research.

“The other challenge you have with saying, ‘We want African Americans to step up first,’ is that we don’t want people to feel that they’re being guinea pigs,” said Georges Benjamin, executive director of the American Public Health Association. “We need to be very careful. We don’t want to give people the perception that they’re being experimented upon.”

Another issue is that the Pfizer vaccine requires two doses 21 days apart. During the months when it is in short supply, we don’t want to waste a dose giving it to somebody who won’t get around to coming back in 21 days for the second shot.

The Advisory Committee on Immunization Practices, which gives vaccination guidance to the director of the Centers for Disease Control and Prevention, won’t make a decision on who should get a vaccine, and whether to give preference to communities of color, until a vaccine is approved.

The group will be guided in part by a framework released last month by the National Academies of Sciences, Engineering, and Medicine, which advocates taking an equitable approach

Uh-oh, the word “equitable” has become a euphemism for “racist, but racist against the Bad People so therefore it’s good racism.”

to vaccine allocation. (Other frameworks that are informing ACIP’s discussion on vaccine distribution were created by the Johns Hopkins Bloomberg School of Public Health and the World Health Organization Strategic Advisory Group of Experts.)

The National Academies’ recommendations are broken down into four phases and set a goal to ensure that every step of the process takes into account the disproportionate public health and economic impact the virus has had on the elderly and communities of color.

“We’re making sure that we’re prioritizing those communities who have borne the largest burden of this pandemic,” said Helene Gayle, president and CEO of the Chicago Community Trust and a co-chair of the National Academies report.

Do we even know anymore if blacks are hardest hit, or was that just something back in Spring? From the LA Times for the state of California: Here in California, Latinos are more than twice as like as blacks to have had an official case of corona. I’m guessing that has something to do with blacks having a lot more room in their dwellings per person than do Latinos, who tend to have bigger households and live more densely. But Latinos aren’t America’s current Sacred Cows, so this hasn’t gotten much attention.

Also, keep in mind that the various waves tend to hit different social groups. In America, the very first tended to be Wuhanites, then followed by popular world travelers like Tom Hanks and skiers, then blacks (especially I’m guessing ones who work at airports and in transit). Then the summer wave in the Southwest hit Mexicans really hard, although they got less publicity. I’m figuring the latest wave, which started in the North Central states and is moving southward with the changing season, is probably hitting whites pretty hard, in that whites didn’t get hit that badly in the first 8 months, so now it’s their turn.

So, models based on politicized stereotypes from last spring may well be out of date.

And even the current trends might not predict the future. For example, maybe blacks are particularly susceptible due to a lack of Vitamin D-producing sunshine in winter, so they are more likely to suffer in the next few months than in the last few months.

… “We wanted to make sure that there was real consideration given to getting it to people who are at the highest risk, particularly communities of color, who oftentimes are higher on that social vulnerability scale,” said Gayle.

The first phase outlined by the National Academies would include frontline health workers like those at hospitals or nursing homes and first responders who are at high risk of contracting the virus. …

“An equity lens has to make sure even within those categories that we’re focused on the types of workers that oftentimes are neglected and fall through the cracks in our system,” said Kirsten Bibbins-Domingo, an epidemiologist at the University of California, San Francisco, who was a reviewer for the report. “Those workers are disproportionately low-wage workers. They’re disproportionately workers from communities of color.”

Bibbins-Domingo said taking an equitable approach to that first phase would mean making sure it’s not just doctors who receive the vaccine.

I’ve long cited bus drivers as a category I’m especially concerned about. At least since Jackie Gleason in The Honeymooners, it’s been acceptable and traditional for bus drivers to be fat (which puts them at more risk of dying). It’s not like being a fat flight attendant. If you tend to be fat, driving a bus is not a job where your fatness inconveniences others. Their jobs are important and can’t be done from home, and they are put into contact in enclosed places with lots of random people.