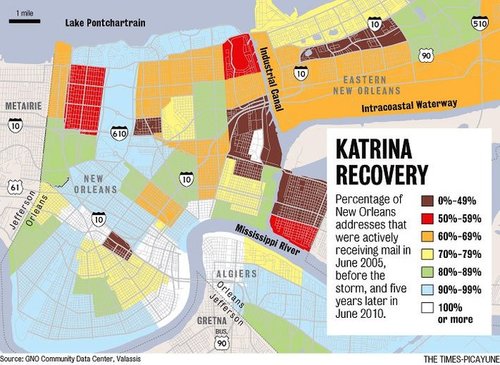 The Revival of New Orleans: a White Coup?

The shadowy concept of a municipal coup goes back at least to the feds setting up and arresting Washington D.C. mayor Marion Barry in 1990. Similarly, the revival of New Orleans over the last ten years since Hurricane Katrina has some of the indications of a slow white coup overthrowing the old black/creole of color power structure and its poor black base of support. The black mayor who was in charge in 2005 is now in jail and the white family that used to run the city government is back in the mayor’s office.

The celebrated improvement in New Orleans public schools seems to have much to do with firing lots of black administrators and teachers. From the NYT:

The Myth of the New Orleans School Makeover By ANDREA GABOR AUG. 22, 2015

WAS Hurricane Katrina “the best thing that happened to the education system in New Orleans,” as Education Secretary Arne Duncan once said? Nearly 10 years after the disaster, this has become a dominant narrative among a number of school reformers and education scholars.

Before the storm, the New Orleans public school system had suffered from white flight, neglect, mismanagement and corruption, which left the schools in a state of disrepair. …

“We don’t want to replicate a lot of the things that took place to get here,” said Andre Perry, who was one of the few black charter-school leaders in the city. “There were some pretty nefarious things done in the pursuit of academic gain,” Mr. Perry acknowledged, including “suspensions, pushouts, skimming, counseling out, and not handling special needs kids well.” …

A key part of the New Orleans narrative is that firing the unionized, mostly black teachers after Katrina cleared the way for young, idealistic (mostly white) educators who are willing to work 12- to 14-hour days.

And also from the NYT:

NEW ORLEANS — As the 10th anniversary approaches of Hurricane Katrina and the catastrophic levee breaches in New Orleans, a new survey finds a stark racial divide in how residents here view the recovery.

Nearly four out of five white residents believe the city has mostly recovered, while nearly three out of five blacks say it has not, a division sustained over a variety of issues including the local economy, the state of schools and the quality of life. …

But comparisons are also made difficult because many of those here in the city now are not those who left. The L.S.U. survey found that more than a quarter of the city’s current residents had moved here since Katrina. Those who did so were wealthier and more likely to be white and college educated than those who lived here before 2005.

My impression of visiting New Orleans a couple of years after the hurricane is that it looked like a great place to have a trust fund. Not much of a city for earning a living, but a nice place to spend inherited wealth.