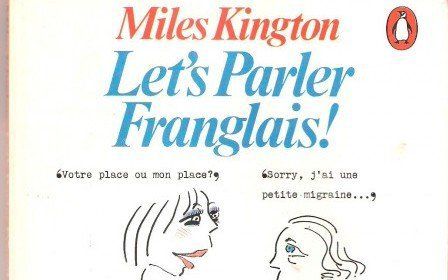 The Real Face Of Bilingualism

Marcus Epstein's post on Obama's bilingualism gaffe suggested that most Canadians can speak French and English. This is incorrect—most Canadians have studied French, or if French have studied English, because it's required by law in elementary school. But if they were asked to actually speak the other language, the results would look something like this, written by P. G. Wodehouse in 1935

Into the face of the young man who sat on the terrace of the Hotel Magnifique at Cannes there had crept a look of furtive shame, the shifty. hangdog look which announces that an Englishman is about to talk French. One of the things which Gertrude Butterwick had impressed upon Montv Bodkin when he left for this holiday on the Riviera was that he must be sure to practise his French. and Gertrude’s word was law. So now, though he knew that it was going to make his nose tickle. he said:

The strain was too great. Montv relapsed into his native tongue.

‘I want to write a letter,’ he said. And having, like all lovers, rather a tendency to share his romance with the world, he would probably have added ‘tn the sweetest girl on earth’, had not the waiter already bounded off like a retriever, to return a few moments later with the fixings.

‘V’là, sir! Zere you are, sir.’ said the waiter. He was engaged to a girl in Paris who had told him that when on the Riviera he must be sure to practise his English. ‘Eenk — pin — pipper — envelope — and a liddle bit of bloddin-pipper.’[The Luck Of The Bodkins, By P. G. Wodehouse, Chapter One]

Obama's idiotic suggestion that all our kids should learn Spanish is, amongst other things (this is multi-dimensional stupidity) an illustration of educational romanticism run amok.

The cold fact is that absent exceptional circumstances — the most common of which is, total immersion at a receptive age — not many human beings can learn another language. Oh, you can learn enough to stumble along and get by on a trip abroad, but if you can attain fluency in a language not your own, without those exceptional circumstances, you are an unusually smart and gifted person. (For my own sad track record, see here.)

Of course, when you have a major language and a minor language, it's members of the minority who are more likely to be bilingual. That makes makes Canada's bilingualism a huge jobs program for French-Canadians, who dominate the Canadian Federal Civil Service, and what would do the same for Hispanics in the United States under Obama's plan.