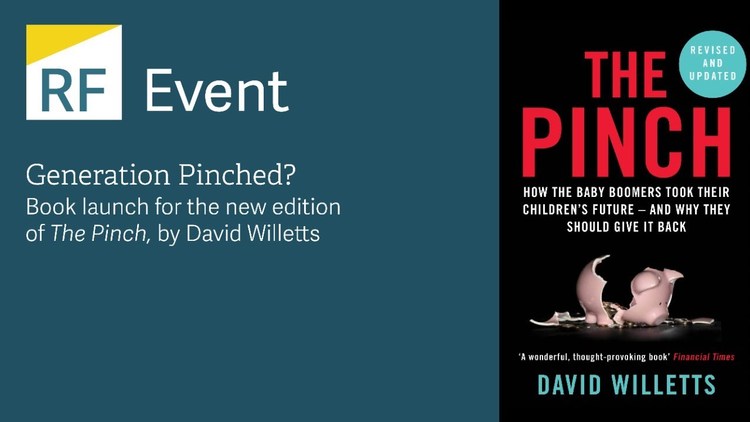 From a review in the UK Guardian by Richard Reeves (the British one, not the American one) of the Tory MP David Willetts' new book The Pinch: How the Baby Boomers Took Their Children's Future - And Why They Should Give it Back.

Willetts might have done better to take as his main theme the links between family, education and social mobility, since on these issues he is on firmer ground. In fact, his title could just as easily have been The Big Grab: How the Rich Are Using Money and Marriage to Buy the Future for Their Kids. His ­opening ­chapter is a tour de force, a brief, brilliant history of England's social architecture. He shows that far from being a modern invention, the nuclear family is a long-standing feature of Anglophone societies. (We are, he says, "the first nuclear power".) The idea that we used to live in big, warm, noisy My Big Fat Greek Wedding-type families is a myth. "Think of England as being like this for at least 750 years," he writes. "We live in small families. We buy and sell houses. We go out to work for a wage."

That quote is worth remembering.

The English have a private, market-based idea of property, in contrast to the familial property forms of our continental neighbours. Over a 44-year period in Leighton Buzzard, more than 900 houses changed hands. Two-thirds were sold to someone outside the family, rather than being passed down. The years in question? 1464 to 1508.

By contrast, the large familial networks of continental Europe act as the institutional anchor for property ownership and transmission, as well as for the formation of businesses and the provision of welfare. Willetts speculates that the property-managing function of French families may explain why romantic love there is more often associated with extramarital relationships. The orientation towards family-owned firms in Germany helps to explain the strength of the Mittelstand, the medium-sized, locally rooted layers of corporations.

Willetts does not at any point fall victim to the awful if-only-we-were-more-like-the-continentals lament. He does not want to alter our social DNA. But our particular social economy has two important consequences. First, the smallness of our families puts a greater emphasis on non-familial civic institutions. Small families need civil society more. This is why medieval guilds, trade unions and churches have played such an important role in our history.

Second, the welfare role of government is greater in a society marked by a highly privatised notion of property and small families. Breadwinning men are less likely to have family resources to fall back on, so need out-of-work benefits. This system worked reasonably well until the rise in divorce rates in 1970s and 1980s. Then, millions of women, many with dependent children, suddenly became reliant on the state. As Willetts puts it: "A welfare system that was ­originally designed to compensate men for loss of earnings is slowly and messily redesigned to compensate women for the loss of men." And everybody — but ­especially women — ends up poorer. This is why Willetts, certainly no reactionary, is so pro-marriage.

Strong parental relationships also influence children's well-being, which in turn affects the chances of upward social mobility, another of Willetts's preoccupations. Drawing on the very latest and best research, Willetts shows how the middle classes are tightening their grip on the opportunities available for the next generation. The professions are all but sealed off from the poor: "The competition for jobs is like English tennis, a competitive game but largely one the middle classes play against each other."

In general, this is a remarkably non-political book; David Cameron is mentioned just once. But ­Willetts does argue strongly for a vouchers scheme in ­education, weighted in favour of the poor, in order to break the middle-class stranglehold on the state education ­system. And the explanation for the flat-lining of social mobility brings Willetts back to social structures and, in particular, the trade-off between gender equality and class equality. The principal beneficiaries of the expansion of higher education have been the daughters of the middle class. Six per cent of girls born into low-income families in both 1958 and 1970 went to university; for girls born into richer households, the rate rose from 21 per cent to 36 per cent.

"Educational upgrading" — the increase in the numbers of young ­people getting qualifications — accounts for 40 per cent of the fall in mobility for women between 1958 and 1970. This is, as Willetts says, a shocking statistic. The expansion of higher education, far from improving social mobility, has actually made it worse.

Women graduates marry male graduates and this trend towards "assortative mating" has increased in recent years, which means that on a household level, inequality is bound to rise. The narrowing of the gender gap seems to have widened the class gap. As Willetts puts it: "Feminism has trumped egalitarianism." And not just for one generation, either: just 5% of degree- ­educated mothers split up from their partner before their child's third birthday, compared with 42% of mums with no qualifications.