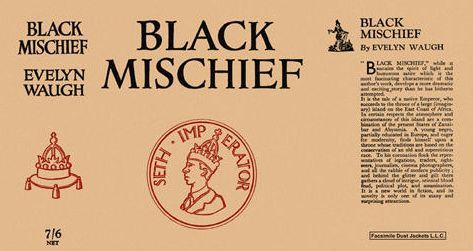 The Pageant of Birth Control in Evelyn Waugh's BLACK MISCHIEF

With the African population explosion attempting to pour into Europe via leaky boats in the Mediterranean, it’s worth considering a classic passage from the annals of English literature on the difficulties of promoting family planning in Africa.

Evelyn Waugh’s 1932 comic novel Black Mischief fictionalizes his visit to Ethiopia in 1930 to see the coronation of the Emperor Haile Selassie. In Black Mischief, young Emperor Seth of Azania has appointed his Oxford classmate Basil Seal as Minister of Modernization. Having read that contraception was modern, the Emperor orders a Pageant of Birth Control. But …

The opposition to the pageant was firm and widespread. The conservative party rallied under the leadership of the Earl of Ngumo. This nobleman, himself one of a family of forty-eight (most of whom he had been been obliged to assassinate on his succession to the title) was the father of over sixty sons and uncounted daughters. This progeny was a favorite boast of his: in fact he maintained a concert party of seven minstrels for no other purpose than to sing at table about this topic when he entertained friends. Now in ripe age, with his triumphs behind him, he found himself like some scarred war veteran surrounded by pacifists, his prestige assailed and his proudest achievements held up to vile detraction. The new proposals struck at the very roots of sport and decency and he expressed the general feeling of the landed gentry when he threatened amid loud grunts of approval to dismember any man on his estates whom he found using the new-fangled and impious appliances.

The smart set, composed (under the leadership of Lord Boaz) of cosmopolitan blacks, courtiers, younger sons and a few of the decayed Arab intelligentsia, though not actively antagonistic, were tepid in their support: they discussed the question languidly in Fifi’s salon and, for the most part, adopted a sophisticated attitude maintaining that of course they had always known about these things, but why invite trouble by all this publicity; at best it would only make contraception middle class. In any case this circle was always suspect to the popular mind and their allegiance was unlikely to influence public opinion in the Emperor’s favour.

The Churches came out strong on the subject. No one could reasonably accuse the Nestorian [Christian] Patriarch of fanatical moral inflexibility — indeed there had been incidents in his Beatitude’s career when all but grave scandal had been caused to the faithful — but whatever his personal indulgence, his theology had always been unimpeachable. Whenever a firm lead was wanted on a question of opinion, the Patriarch had been willing to forsake his pleasures and pronounce freely and intransigently for the tradition he had inherited. There had been the ugly affair of the Metropolitan of Matodi who had proclaimed himself fourth member of the Trinity; … there was the painful case of the human sacrifices at the Bishop of Popo’s consecration — on all these and other uncertain topics the Patriarch had given proof of a sturdy orthodoxy.

Now, on the question of birth control, his Beatitude left the faithful in no doubt as to where their duty lay. … the Patriarch composed an encyclical in rich, oratorical style and despatched copies of it by runners to all parts of the island. Had the influence of the established Church on the popular mind been more weighty, the gala should have been doomed, but as has already been mentioned the Christianising of the country was still so far incomplete that the greater part of the Empire retained with a minimum of disguise their older and grosser beliefs and it was, in fact, from the least expected quarter, the tribesmen and villagers, that the real support of Seth’s policy suddenly appeared.

This development was due directly and solely to the power of advertisement. In the dark days when the prejudice of his people compassed him on every side and even Basil spoke unsympathetically of the wisdom of postponing the gala, the Emperor found among the books that were mailed to him monthly from Europe, a collection of highly inspiring Soviet posters. …

Finally, there resulted a large, highly colored poster well calculated to convey to the illiterate the benefits of birth control. … Copies were placarded all over Debra-Dowa; they were sent down the line to every station latrine, capital and coast; they were sent into the interior to vice-regal lodges and headmen’s huts, hung up at prisons, barracks, gallows and juju trees, and wherever the post was hung there assembled a cluster of inquisitive, entranced Azanians.

It portrayed two contrasted scenes. On one side a native hut of hideous squalor, overrun with children of every age, suffering from every physical incapacity — crippled, deformed, blind, spotted and insane; the father prematurely aged with paternity squatted by an empty cook-pot; through the door could be seen his wife, withered and bowed with child bearing, desperately hoeing at their inadequate crop. On the other side a bright parlour furnished with chairs and table; the mother, young and beautiful, sat at her ease eating a huge slice of raw meat; her husband smoked a long Arab hubble-bubble (still a caste mark of leisure throughout the land), while a single, healthy child sat between them reading a newspaper. Inset between the two pictures was a detailed drawing of some up-to-date contraceptive apparatus and the words in Sakuyu: WHICH HOME DO YOU CHOOSE?

Interest in the pictures was unbounded; all over the island woolly heads were nodding, black hands pointing, tongues clicking against filed teeth in unsyntactical dialects. Nowhere was there any doubt about the meaning of the beautiful new pictures.

See: on right hand: there is rich man: smoke pipe like big chief: but his wife she no good: sit eating meat: and rich man no good: he only one son.

See: on left hand: poor man: not much to eat: but his wife she very good, work hard in field: man he good too: eleven children: one very mad, very holy. And in the middle: Emperor’s juju. Make you like that good man with eleven children.

And as a result, despite admonitions from squire and vicar, the peasantry began pouring into town for the gala, eagerly awaiting initiation to the fine new magic of virility and fecundity.