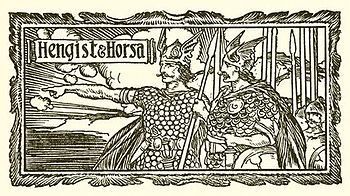 Eastern English Are About 3/8ths Anglo-Saxon There’s a new article in Nature about what they’ve learned from the DNA of ten very old dead bodies dug up from around Cambridge in the east of England.

British population history has been shaped by a series of immigrations, including the early Anglo-Saxon migrations after 400 CE. It remains an open question how these events affected the genetic composition of the current British population. Here, we present whole-genome sequences from 10 individuals excavated close to Cambridge in the East of England, ranging from the late Iron Age to the middle Anglo-Saxon period. By analysing shared rare variants with hundreds of modern samples from Britain and Europe, we estimate that on average the contemporary East English population derives 38% of its ancestry from Anglo-Saxon migrations. We gain further insight with a new method, rarecoal, which infers population history and identifies fine-scale genetic ancestry from rare variants. Using rarecoal we find that the Anglo-Saxon samples are closely related to modern Dutch and Danish populations, while the Iron Age samples share ancestors with multiple Northern European populations including Britain.

So, in the east of England, about 3/8ths of the ancestry comes from the Anglo-Saxon invasions of roughly 1500 years ago. (Of course, there were also subsequent invasions by Vikings and Norsemen (Frenchified Vikings), and the three are kind of hard to tell apart.)