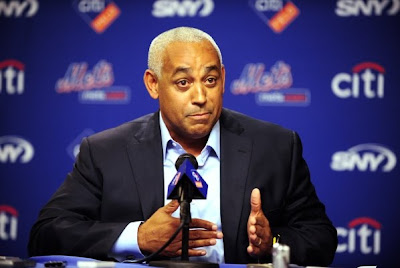 When the Mets take the field against the Marlins this Opening Day, the sun will be shining and Johan Santana will be on the hill. You don't need much more than that to feel hopeful about the season that's about to unfold even if there will be plenty of days with clouds and Oliver Perez in the weeks and months to come.

Division Envy Greets the Mets at Every Turn: Even the Nationals give reason for jealousy by Josh Alper, NBC New York, April 5, 2010.

Mets lefty head-case Oliver Perez had one very good—by today's lowered standards— season in 2007, going 15-10, with a 3.56 ERA. After he struggled to go 10-7/4.22 in 2008, Mets General Manager Omar Minaya rewarded him with a guaranteed $36 million, three-year contract. And this was one year after Minaya had awarded an insane four-year, $25 million contract to aging, gimpy second baseman, Luis Castillo. At that point, Perez had a lifetime record of 55-60, and promptly had a baseball meltdown, going 3-4/6.82 in 2009. 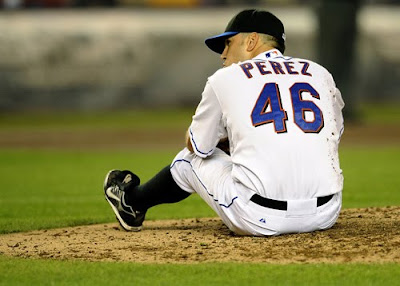 Oliver Perez on the mound.

Perez was walking hitters around the bases, yet he had the nerve to respond to reporters, "Walks are part of the game."(

And when he was first put on the disabled list last season, I'm sure I wasn't the only Mets fan who wondered (wrongly, as it turned out) whether the team wasn't benching a physically fit player, in order to save face. But hale or hurt, Perez' mechanics and head are both wrecks, and his lousy performance in 2009 cannot simply be chalked up to his having been hurt. 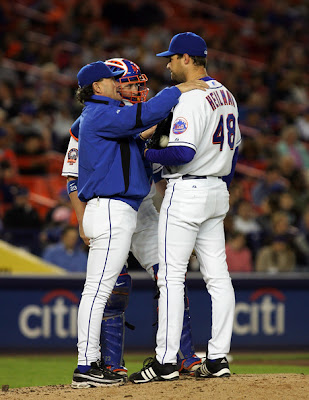 The one excellent year Perez had, owed much to the ministrations of pitching guru Rick Peterson, under whose tutelage that same season right-hander John Maine also had a career year (15-10/3.91). Minaya's right-hand man, out-of-control, Hispanic chauvinist Tony Bernazard, responded by successfully campaigning behind Peterson's back to get him fired. 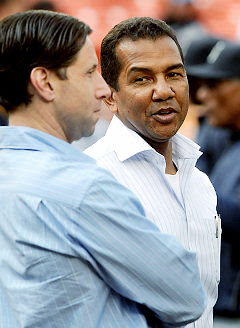 Since then, the team's starting pitching has been in free fall, racking up injuries. In 2007, the team's front four starters—Maine and Perez, and 41-year-old Tom Glavine and the equally geriatric Orlando Hernandez (a Cuban who, at the outset of his American career, shaved at least eight years off his age), racked up 119 starts. By contrast, their 2009 counterparts, Johan Santana, Mike Pelfrey, Livan Hernandez (Orlando's younger brother), and castaway Tim Redding, managed only 96 starts.

Perez is presently the team's fifth starter, a position typically held by rookies making the minimum, or bargain-basement journeymen picked up off the scrap heap (see Redding, Tim).

But who knows if he can even pitch? A week ago, Mets skipper Jerry Manuel suggested that Perez might be in a "dead arm period."( A pitcher who has never thrown even 200 innings in a season? He hasn't earned the right to suffer from a dead arm!

On February 4, 2009, long before Perez hurt his right knee, baseball money blogger "devil fingers"( (aka Matt Klaassen) had estimated, based on Perez' career stats, that Minaya had overpaid him by at least 44 ($11M), and as much as 82.8 percent ($16.3M), depending on which metric one uses. 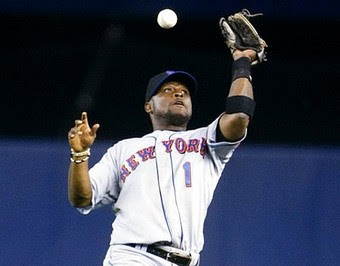 On June 12, Luis Castillo, whose real age is classified, drops a would-be game-ending pop-up against the Yankees, thereby converting an 8-7 Mets victory, into a 9-8 Yankees victory.

Perez' dead-ender apologists still talk about him needing "experience,"( in order to "mature."( Given that he'll be turning 29 in August, does that mean he'll be a mature pitcher when he's 40?

In the damning-with-faint-praise department, notwithstanding the broken English he speaks after 11 years in the country, Perez is not a total waste of space. Not only does he have the best stuff on the staff, including—when he's right, as he was in 2007—one of the game's great, late-breaking sliders, but last season he was the team's best-hitting pitcher. After hitting a ground ball, he'd bust it down the first-base line, as if his life depended on it. (That's also why I know that he was pitching lousy while healthy, as well as when he was hurt.)

Last fall, apparently, someone whispered something in Omar Minaya's ear, leading to the Jason Bay signing. Maybe it was, "Remember what happened to Tony Bernazard?,"(, whom Minaya threw under the bus July 27, in order to save his own job. 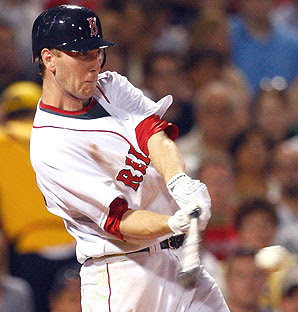 Back to Josh Alper:

That's the bed the Mets have made and now they've got to sleep in it. That task will be all the harder thanks to the constant divisional reminders of how far off the rails things have gotten in Queens. Every other team in the NL East has built toward this season with a stronger sense of purpose than the Mets and those team's best-case scenarios all take fewer leaps of faith than the one that features the Mets making the playoffs with an Opening Day cleanup hitter who wasn't a sure bet to make the roster a week ago. 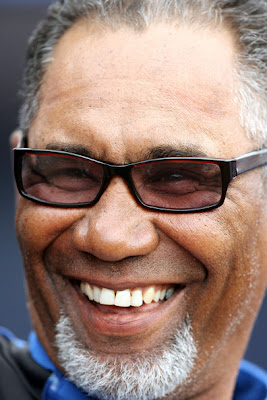 That lack of purpose is spelled "O-m-a-r M-i-n-a-y-a."( And yet, New York's shamelessly Hispandering MSM has decided to bail out Minaya. Using as a pretext the flashes of talent some Mets farmhands showed in spring training, local sports writers and news readers have pardoned Minaya for his years-long mishandling of the team's farm system, put Mets skipper Jerry Manuel on the hot seat, and fully expect—and evidently want—him to take the fall for Minaya.