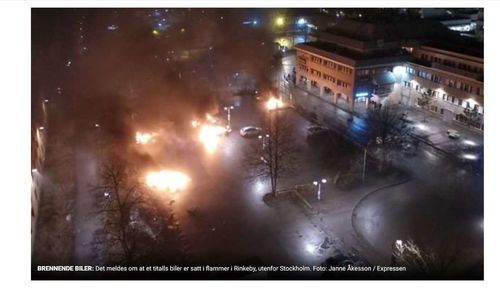 The Global Machine Behind the Rise of Far-Right Nationalism

Sweden was long seen as a progressive utopia. Then came waves of immigrants — and the forces of populism at home and abroad.

The square where witnesses said Russian journalists were trying to bribe immigrants into violence.

RINKEBY, Sweden — Johnny Castillo, a Peruvian-born neighborhood watchman in this district of Stockholm, still puzzles over the strange events that two years ago turned the central square of this predominantly immigrant community into a symbol of multiculturalism run amok.

First came a now-infamous comment by President Trump, suggesting that Sweden’s history of welcoming refugees was at the root of a violent attack in Rinkeby the previous evening, even though nothing had actually happened.

“You look at what’s happening last night in Sweden. Sweden! Who would believe this? Sweden!” Mr. Trump told supporters at a rally on Feb. 18, 2017. “They took in large numbers. They’re having problems like they never thought possible.”

The president’s source: Fox News, which had excerpted a short film promoting a dystopian view of Sweden as a victim of its asylum policies, with immigrant neighborhoods crime-ridden “no-go zones.”

And it was right around that time, according to Mr. Castillo and four other witnesses, that Russian television crews showed up, offering to pay immigrant youths “to make trouble” in front of the cameras.

“They wanted to show that President Trump is right about Sweden,” Mr. Castillo said, “that people coming to Europe are terrorists and want to disturb society.”

That nativist rhetoric — that immigrants are invading the homeland — has gained ever-greater traction, and political acceptance, across the West amid dislocations wrought by vast waves of migration from the Middle East, Africa and Latin America. In its most extreme form, it is echoed in the online manifesto of the man accused of gunning down 22 people last weekend in El Paso.

In the nationalists’ message-making, Sweden has become a prime cautionary tale, dripping with schadenfreude. What is even more striking is how many people in Sweden — progressive, egalitarian, welcoming Sweden — seem to be warming to the nationalists’ view: that immigration has brought crime, chaos and a fraying of the cherished social safety net, not to mention a withering away of national culture and tradition.

What could possibly explain why the famously liberal Swedish population is slowly coming around to the view that immigrants are committing annoying levels of crime in Sweden other than a Vast Right-Wing Conspiracy centered in the Kremlin? Obviously, as everybody who has been to college knows, the only reason anybody would imagine that different ethnicities might have different crime rates would be due to a global conspiracy.

Fueled by an immigration backlash — Sweden has accepted more refugees per capita than any other European country — right-wing populism has taken hold, reflected most prominently in the steady ascent of a political party with neo-Nazi roots, the Sweden Democrats. In elections last year, they captured nearly 18 percent of the vote.

To dig beneath the surface of what is happening in Sweden, though, is to uncover the workings of an international disinformation machine, devoted to the cultivation, provocation and amplication [sic] of far-right, anti-immigrant passions and political forces. Indeed, that machine, most influentially rooted in Vladimir V. Putin’s Russia and the American far right, underscores a fundamental irony of this political moment: the globalization of nationalism.

The central target of these manipulations from abroad — and the chief instrument of the Swedish nationalists’ success — is the country’s increasingly popular, and virulently anti-immigrant, digital echo chamber.

Similarly, the Kremlin must be behind the widespread belief in America that blacks commit a higher level of crime than other ethnicities.